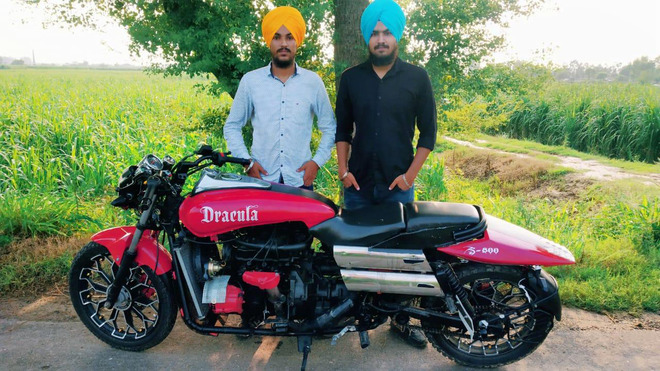 A modified Dracula S-800 motorbike belonging to two friends — Davinder Singh (20) and Harsimran Singh (18) — of Gehlran village in Bhogpur here, can give any luxury motorcycle or bike a run for its money.

Both of them have meticulously converted an old Maruti 800 car into a motor bike within one-and-a-half months’ time. They said they started working on the manufacturing process i.e. the design, thinking and material specification in June, while they transformed their concept into reality just a few days ago.

“After designing, it took us nearly one-and-a-half months (July 1 to August 8) to finally bring our Dracula (bike) on road and enjoy the luxury ride,” said Davinder.

He said they have modified the bike in a magnificent way and have used accessories of four different cars and bikes. The accessories they used include the 800cc car engine of Maruti 800, radiator and cooling fan of Tata ace, differential of Maruti Suzuki, steel footrest of Mahindra Bolero, brakes, clippers, chassis, front shocker, handle and seats of Bajaj Pulsar 220, head light, mudguard of Yamaha FZ, rim, chain set, speedometer of Bullet Classic DD and back mudguard and indicators of KTM. Besides, the expected mileage is 20 km per litre and speed can go up to 200-220km/hr.

When asked about the reason behind modifying the car into a bike, Davinder and Harsimran said they had a penchant for bikes since childhood. They said they have been good friends since long and often shared their personal feelings with each other. Davinder said: “I was since willing to buy a Harley Davidson, but couldn’t due to some personal reasons. During this lockdown, we got enough time to work on our creative side and it was then, that we decided to turn our dream of owning a luxury bike into reality. “In the first week of July, when our designing part was done, we rented a workshop at our village for Rs35,000 for a month. We spent all our days and nights in the last one month at that same workshop, working on our bike,” said Harsimran, adding that a total of Rs2 lakh has been spent in giving their bike the look they wanted.

On being questioned how they would get their bike registered, as all sorts of car and bike modifications are banned in India as per SC’s latest order, the duo replied that they were aware of the fact and have modified the bike out of their passion and were riding it inside their village only. They said they have a keen interest in modifying vehicles and have plans to move abroad, as vehicle modification business has a lot of scope in foreign nations.