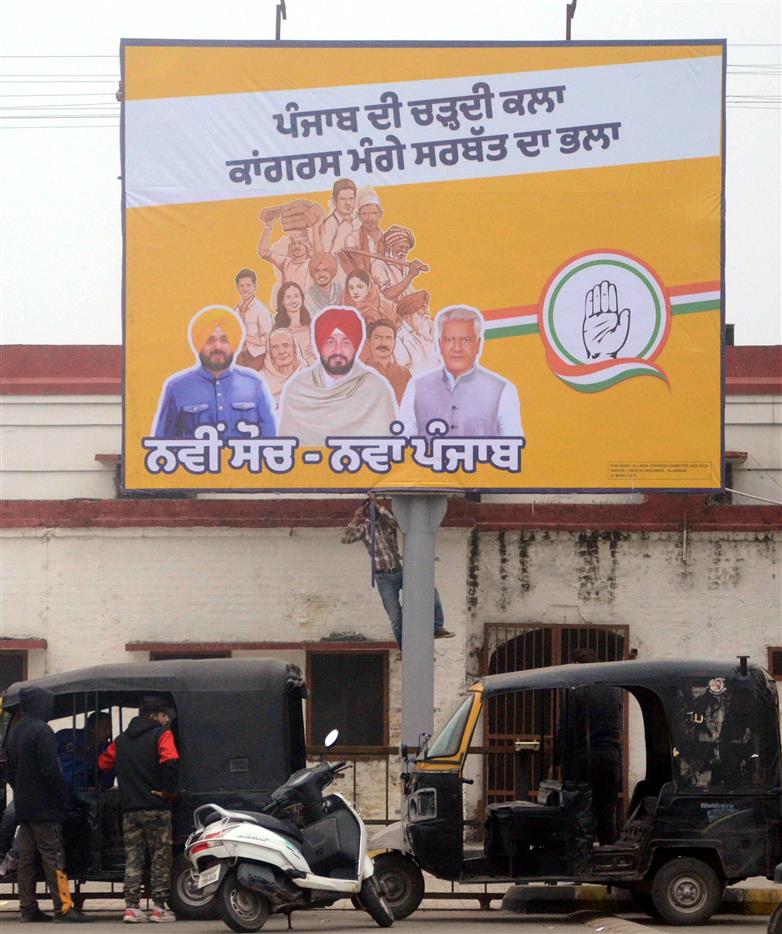 With the Congress choosing not to project any CM face for the forthcoming Assembly poll in the state, the pictures of Congress trio — Punjab CM Charanjit S Channi, PPCC chief Navjot Sidhu and chairman of the Congress Campaign Committee Sunil Jakhar — have figured on the new hoardings that are being put up across the region.

The hoardings with three big faces of the party and slogan ‘Navin soch-Nawan Punjab’ and a one-liner ‘Punjab di chardi kala, Congress mange sarbat da bhala’ (Positive attitude of Punjab, Congress seeks blessings for everyone) are being installed in various cities of Punjab. Surprisingly, the pictures of the senior AICC leaders or even Punjab in-charge Harish Chaudhary are not seen in the backdrop. Instead caricatures of common Punjabis, people from different religions, age and sections, including a farmer have been put up.

Since the party does not want to annoy anyone at this crucial stage and take everyone along, Harish Chaudhary has been stressing that the Vidhan Sabha elections would be fought collectively with CM Channi as the Dalit face, Sidhu as the Jat face and Jakhar as the Hindu face. Sidhu had been objecting to Channi’s hoardings put up across the state. But today Punjab minister Rana Gurjeet Singh said putting up such hoardings implied raising a question mark on the working of the ‘tried and tested CM’ Charanjit Singh Channi. He said such an attempt would be suicidal to the party.

The party leaders are learnt to have finalised the format of more new hoardings, which would focus on issues related to power tariff reduction, cut in fuel prices, starting new bus routes, offering free bus service to Kartarpur Sahib, making Punjabi compulsory in school education till Class X and introducing 6th Pay Commission for government employees, the recently taken decisions on which it is banking for the coming elections.