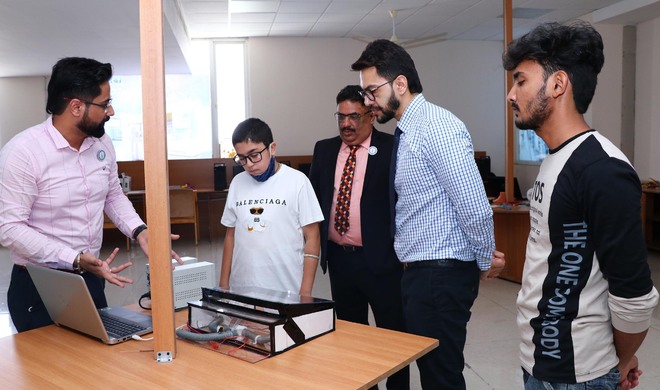 A student of CT Public School, Parth Verma, studying in Class VIII, has filed a patent after developing a ‘Vehicle ventilation regulation device’, in collaboration with the Robotics and Automation Department of the CT University.

The invention pertains to a vehicle ventilation regulating device that maintains the flow of pure air inside the vehicle by restricting the flow of polluted air present in the surroundings to enter the vehicle, hence ensuring the health of the user.

Parth, a young researcher from Punjab, hit upon the idea when he found that smoke from the fields was penetrating into vehicles. He observed that smoke could be inhaled inside the car when the car ventilation was still on. He met Dr Harmeet Singh, Deputy Director IPR cell, CT University and discussed the issue with him in a bid to resolve this problem. So, they came up with the idea to automate the mechanism of keeping the vehicle’s internal air intact and tried making a system for existing cars.

First, the 3D model was created in the software and then the circuit for the same was tested. The team developed the prototype in one week and the final system was tested successfully. Finally, the patent was filed. Parth Verma said, “The idea is ready for commercialisation and can be used in the existing cars. In the present invention, a vehicle ventilation regulating device comprises a push button manually operated by a user to enable ON, OFF or AUTO modes that results in opening or closing of an air inlet flap, smoke detection sensor detects presence of airborne particulate and unfavorable gases outside the vehicle, a controller (Arduino Uno) connected with the sensor.

Congratulating the team, including the young researcher, Managing Director Manbir Singh said, “We are glad about tapping the young minds for research. We have found a gem at such a young age. I also urge every student to come up; even with a small idea as together we can do wonders.”