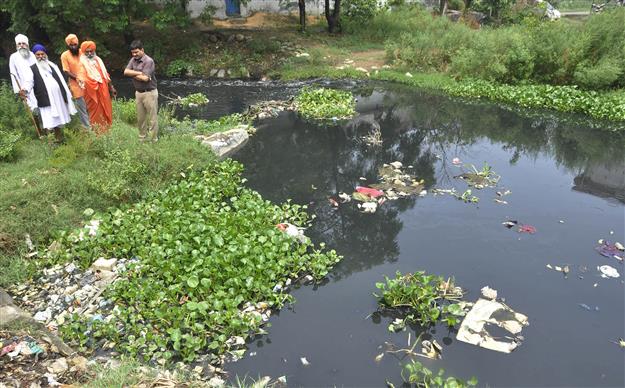 The Punjab Pollution Control Board (PPCB) on Tuesday asked all the illegal dairies running along the bank of the Kala Sanghian drain to stop the illegal discharge of their effluents and dumping of cow dung waste into the drain or face closure within 30 days.

The Board officials have also asked the dairy owners to provide treatment and reuse/legal disposal arrangements for their effluents and proper management of cow dung waste within a month’s time. Krunesh Garg, member-secretary, Punjab Pollution Control Board, Patiala, appealed, “We will be constrained to take action if compliance is not made within the given time-frame.”

The dairies are located along the banks of Kala Sanghian drain at Nahal, Kutlupur, Bulandpur and Gadaipur villages of Jalandhar. Since the dairy owners were discharging their untreated effluents and dumping their cow dung waste into Kala Sanghian drain, they were issued directions by the PPCB for shifting their dairies from the existing site to the Jamsher Dairy Complex. They had been given six months to shift. However, the dairies failed to comply with the directions even after the lapse of given time period.

The matter had also reached the National Green Tribunal and it had passed orders to the authorities concerned to ensure that the dairy effluents are not discharged into the drain and the monitoring committee constituted by the NGT had taken a serious view of the matter.

Accordingly, 29 dairies operational on the banks of Kala Sanghian drain at Nahal and Kutlupur villages and seven dairies at Bulandpur and Gadaipur villages which were still discharging their untreated effluents into Kala Sanghian drain were issued notices under Section 33-A of Water (Prevention & Control of Pollution) Act for closure with an opportunity of personal hearing before the member-secretary, PPCB, by Tuesday (today).

After the hearing, the authorities directed them to comply or face closure and disconnection of electricity supply available on the premises of dairies.

Some of the dairy owners did not attend the hearing. However, keeping in view the seriousness and urgency of the matter, an ex-parte decision was taken by the competent authority of the Board for those dairies as well. Some of dairy owners did not attend the personal hearing in spite of pursuance by the officers of the Board and the fact that the notices regarding hearing were delivered to all the dairies at their doorstep in person by the Board.