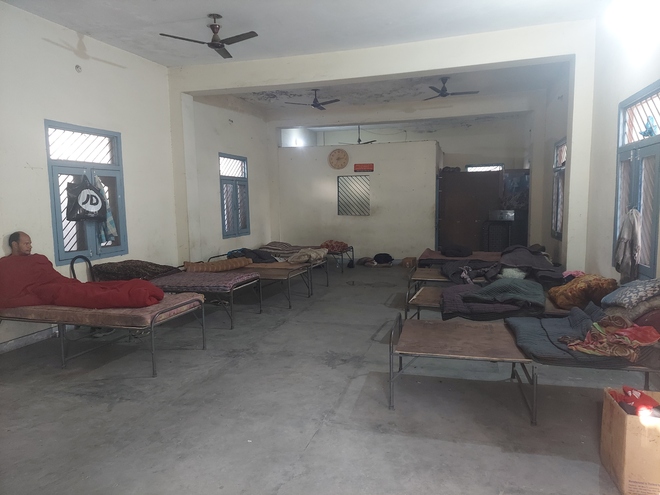 The deplorable condition of Rain Baseras (night shelters) in the city is keeping the homeless visitors at bay. Neither beds/ mattresses nor restrooms are in a usable state. Owing to the district administration and Municipal Corporation’s apathy, a few visitors are helpless as they have no option but to spend cold nights in these torn beddings.

“This is my fourth day at the night shelter. The walls at the shelter saves us from the chill, but lack of blankets and mattresses serves no purpose. The washrooms also stink throughout the day,” said Kumar (45), who was sleeping inside a shabby quilt.

Apart from the appalling condition of night shelters, caretakers have left reportedly because they were not being paid for months. A fast food vendor outside ROB near Lyallpur Khalsa College night shelter said it’s been months since the workers left the night shelter. Happy, a caretaker who worked here previously, said: “I was hired with the assurance of monthly salary. The contractor told me that it was a government job, however, I wasn’t paid salary for six months. Hence, to afford two-square meals, I had to take up another job. Now, I visit the night shelter as a visitor only.”

Similarly, Ram Singh, who maintains the night shelter at Damoria underbridge, near the railway station, said, the contractor does not pay him. These days, only 2-3 homeless people are taking shelter here even though there was a capacity for 30 to 35 persons.

A destitute camping near the railway lines under ROB Lyallpur Khalsa College said: “The temperature has started dipping, therefore, there is a need to ensure cleanliness and other required arrangements for visitors at these night shelters.”

“Homeless people have nowhere else to go. The authorities should ensure the arrangement of clean beddings, blankets, drinking water, hot water and other facilities. There should be adequate number of toilets too. Hygienic conditions should prevail for prevention of diseases,” said a dhaba owner, who works outside the bus stand night shelter.

Meanwhile, Harish Sabbarwal, an employee of Water and Sanitation Department, Municipal Corporation, who has been made the in-charge of the night shelters, had no knowledge about the unavailability of caretakers at these shelters. He said: “The new tenders for night shelters has not been floated by the MC yet. I will visit the night shelters tomorrow and make adequate arrangements.”