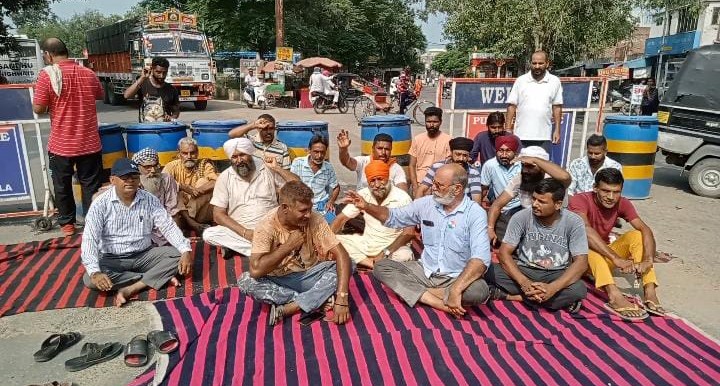 Residents stage a dharna in the middle of a road against the official apathy in Phagwara on Tuesday.

Residents of Phagwara and Hadiabad today held a sit-in in the middle of the main Phagwara-Nakodar road at Hadiabad Chowk here to lodge their protest over the deteriorating road conditions.

The Centre released Rs 16 crore to the Punjab Government for the road work, but it failed to pay the contractor involved in the project, due to which the work has stopped. — Som Prakash, Union Minister of State

Akali leader Sukhwinder Singh Kamboj and farmer leaders Gurpal Singh Pala, Jasbir Singh, Hardev Singh Malhi, Tara Singh Dhanjal, etc., were among those present in the dharna. They said commuters were being forced to ply their vehicles on the pothole-riddled road connecting Phagwara, Satnampura, Hadiabad and Zandiala Manzki for the past three years with the authorities looking the other way despite several requests.

Commuters alleged due to the poor condition of the road there vehicles required frequent maintenance, besides increasing their travelling time. Later, protesters met Phagwara SP Mukhtiar Rai and SDM Satwant Singh in the SP Office’s and both officers promised the protesters of a speedy solution.