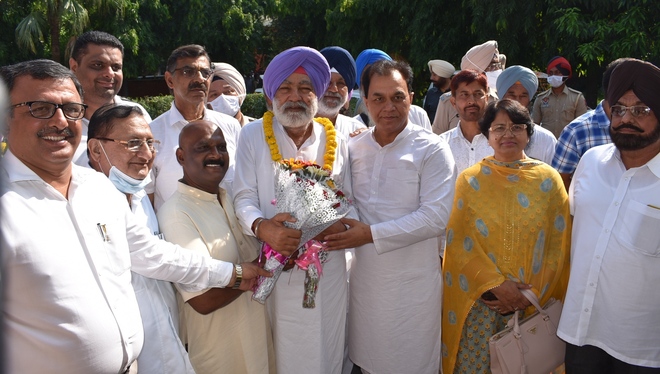 MLA Dr Raj Kumar welcomes Sangat Singh Gilzian on coming to Hoshiarpur after being inducted in the Cabinet. Tribune photo

Punjab Forests, Wild Life and Labour Minister Sangat Singh Gilzian on Tuesday asserted that the Punjab Government would fulfill each and every promise made to the people of the state, besides ensuring holistic development in all sectors.

The minister, who arrived in the city for the first time after being sworn in as a Cabinet minister a few days ago, took the guard of honour from Punjab Police personnel at the local PWD Rest House, where MLAs and senior civil and police officers also gave a warm welcome to Gilzian.

While interacting with mediapersons, the minister said the Punjab Government, led by Chief Minister Charanjit Singh Channi, would ensure early completion of 18 major projects. “The state government has over three months for the all-round development and completion of the remaining projects,” said the minister, adding that all the works would be commenced and completed within a stipulated time-frame.

As for the farmers’ demands, Gilzian said the Punjab Government was with farmers and supporting their demands from day one. He said the Punjab Cabinet expressed solidarity with the farmers over the black farm laws, besides extending all possible help to the families of those farmers, who lost their lives during the protests against the laws.