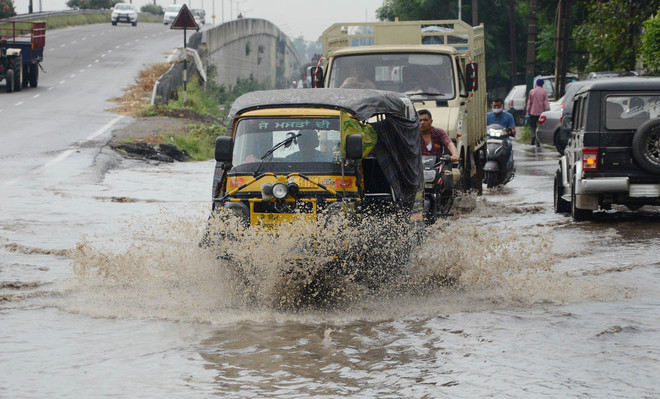 Incessant rain from early morning till this afternoon not only caused a lot of inconvenience to the city residents, but also exposed the poor functioning of the civic body.

Almost entire city was inundated. Schoolchildren had to face great difficulty while passing through water-logged roads with their clothes and shoes totally drenched as it rained heavily between 7 am and 8 am, when almost all students commute between their houses and schools.

The worst affected were students of Government Girls School, Basti Sheikh. The three roads leading to the school had knee-deep water when the school started today. “A resident of the area saw girls facing a great difficulty in reaching their schools and offered to help them. He directed them to stand at an elevated place and wait for him.

He drove his own car and ferried the girls to the school doorstep. He had to make a couple of rounds to drop them all, not bothering about the fact that the standing water could damage his car,” said Pawan Luther, a resident of the area.

Since many roads of the city have been dug up for laying drinking water pipelines, hundreds of commuters faced a harrowing time today as they could not see potholes due to standing rainwater. Several vehicles, including buses, cars and two-wheelers, got stuck in the muck at Bhaiya Mandi Chowk on 120 Feet Road.

The road had been dug up owing to sewer work. While residents of the area around it were aware of deep potholes, those unaware of these got their vehicles hit straight into it. Jasbir Singh Sethi, president of the Mohalla Sudhar Sabha of the area, said, “Dozens of vehicles got damaged at this site, which leads to Gurdwara Chhevi Patshahi also. Some volunteers from our area had to spend more than three to four hours this morning diverting motorists to other roads.” While the low-lying Sodal area, Neelamahal, Basti Sheikh, Domoria under-bridge and 120 Feet Road were flooded as usual. Many other areas also faced the brunt. The residents of Deep Nagar and peripheral villages of Jalandhar cantonment also were ted due to pending road work. People had to wade through muddy water to fetch something from the market area. Sansarpur resident Baldev Singh said, “Work on our outer road has been going on at a snail’s pace for the past nearly two months. The timing of digging of road was so bad that we suffered in the entire monsoon season.”