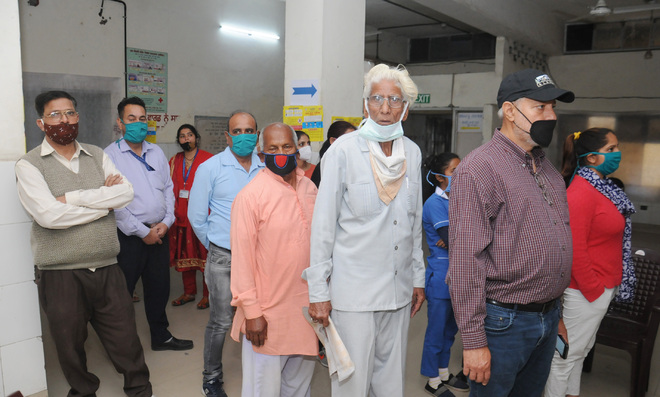 Elderly queue up to get their first dose of Covid-19 vaccine at the Civil Hospital in Jalandhar on Monday. photo: Sarabjit Singh

The second phase of the vaccination drive for people above 60 years of age and those over 45 with comorbidities began on Monday. A total of 85 senior citizens were vaccinated across the 11 vaccination centres in the district on Monday. As the footfall remained low on the first day, only 16 senior citizens (above 60 years) were administered the dose at the district Civil Hospital. Apart from them, 167 frontline and health workers were also vaccinated.

Moreover, server issues at the Covidshield vaccination centre continued to trouble operators and the elderly alike owing to which the elderly had to wait for over two hours to take their first jab. Those who had completed their registration on Aarogya Setu and CoWIN apps were also a harried lot. Despite having the registration IDs, their names were missing from the dashboard of the vaccination centre.

Vinay Kumar Verma and his wife Geeta Verma, residents of New Jawahar Nagar, who had come to the centre around 11.15 am, said: “We kept sitting outside the vaccination room for two hours. Even as there wasn’t any rush, we could not get the jab on time. The operators told us that our names were not mentioned in the system and we will have to re-register ourselves and that took time.”

The couple had even brought the printed copy of their registration and identity proofs. Similar problems were faced by other elderly people as well and their names were entered again for confirmation.

Surinder Seth, another resident, said he waited for around an hour before receiving the shot. Appreciating the staff, he said, only the server needs to be upgraded, so as to make the process more efficient. Besides, there must be clear indication of what photo identity was required.

Before receiving the Covidshield vaccine jab, written consent was also sought from beneficiaries, who were elated after getting the dose. Dr Indu at the Civil Hospital said apart from 16 people (aged above 60 years), 167 frontline and health workers were also vaccinated on Monday. Proper arrangements were made for people and after receiving their doses, the beneficiaries were asked to rest for nearly 30 minutes outside the vaccination room only.

Total 85 senior citizens were vaccinated across the 11 vaccination centres in the district on Monday. While the count of frontline workers who received the vaccine remained 510, those receiving the second dose were 175 in number, said Dr Rakesh Chopra, District immunisation Officer.