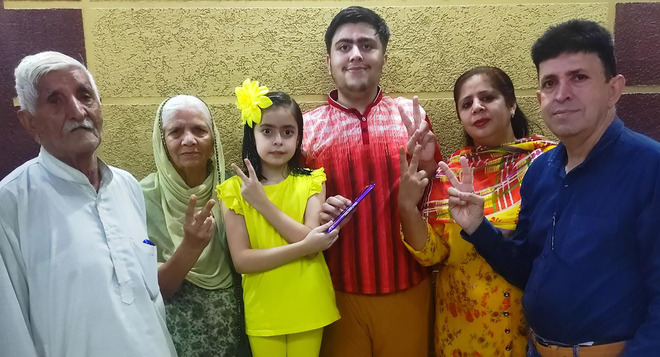 After a long-drawn preparation, the efforts of some city boys to make it to the IITs seem to have finally borne fruits.

Vaibhav Bajaj, a student of MGN Public School, Urban Estate, has attained 180th All-India Rank. The boy, who had attained 35th AIR rank in the JEE mains and got 99.9987 percentile, seemed a bit put off. “I was aiming for a slot above 100. I had prepared quite well, but somehow I got panicky while attempting the paper-1. That spoiled my prospects a bit. But nevertheless, I will be vying for entry into IIT Delhi or Mumbai. I will also try for some research-related courses in mathematics and physics in the IITs for which my teachers are already guiding me.”

Asked how he was celebrating it, he said, “Since it is Dasehra and there is a lot of rush in the markets outside, we have plans to order some good food at home and enjoy with the family today. A treat for the friends will follow later.”

A 96.6 per cent scorer in Class XII, he talked about his journey, “My parents and teachers were very motivating from the very beginning. For JEE, I did 10 hours of study rigorously for almost 30 months at a stretch. I really enjoyed preparing for Olympiads and cracking the examination. I also used to enjoy solving theorems. Gradually, science and mathematics became my favourite subjects”.

Vaibhav says the pandemic came as a big help for him as he could manage his studies and online classes very well. “I could study at odd hours. My commuting time to institutes and school got saved”, he said. Vaibhav’s father Rakesh Bajaj works with PNB Bank and his mother Soni Bajaj is serving with the CPWD.

A student of Police DAV Public School, Aum Gupta has on the contrary improved his rank from his JEE Mains rank last month. He had taken just the first attempt for JEE mains in which he had scored 99.979 percentile and got 291st rank. Ever since, he had started working on to improve for JEE Advance, in which he has now got 215th rank. In Class XII CBSE results, he had got 99 per cent marks.

Aum is now aspiring to get Computer Science Engineering seat in any of the old IITs, said his mother Neetu Gupta, who teaches commerce in his school. His father Dr Rajesh Kumar Gupta teaches mathematics at Lovely Professional University. A resident of Green Avenue in Basti Sheikh, Aum said a proper atmosphere for studies provided by his parents helped him to concentrate in his studies and keep the focus.

The boy shared that he was regular in his studies from day 1. “I attempted a lot of tests after I was done with the syllabus. I always made it sure to note my mistakes, analyse them and rectify them for future”, he said adding, “I also took out time for some relaxation by going out to play cricket or cycling”.

Bhav Khurana, a student of Army Public School, Khusropur, has scored 1238th rank and hopes to get admission in IIT Guwahati. He had got 156th rank in JEE Mains. His mother Anju Bala is working in the same school. The mother of the 98 per cent CBSE Class XII scorer shared, “My son faced a huge loss as a child as he lost his father in accident when he was still in Class IV. We all took a lot of time to recover from the tragedy. His success today shows his comeback from that grave loss. It is a time for me to rejoice as my elder daughter Geetika Khurana too has got the job of Community Health Officer recently. The dreams which my husband saw for both the children have got fulfilled.”