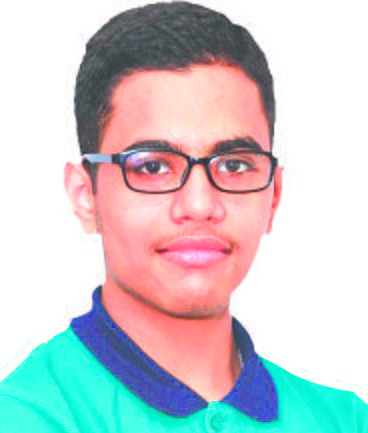 Ujjwal Mehta, a student of Apollo Public School in Patiala and the resident of Jalandhar, has topped the state and district in the JEE (Main), the results of which were declared by the National Testing Agency (NTA) late Friday evening.

Though he didn’t appear for the exam held in September first week, his last score (exam held in January) helped him fetch the first spot.

I avoided being on social media throughout my preparation. I also avoided using smartphones and studied for a minimum of six hours a day. I focused on my mistakes and made sure that I never repeated the same mistakes again. Regular mock tests helped me in scoring well. While others usually solve one mock test a day, I would solve two. I enjoy solving mock test papers which prepared me for every kind of question in the exam. — Ujjwal Mehta

Talking to The Tribune, Ujjwal, said he was aspiring to join IIT Bombay after clearing the JEE Advance. Having scored good marks in all three subjects (maths 100, physics 99.99 and chemistry 99.99) in JEE exam held in January 2020, he said he didn’t appear for the exam that was held recently.

“I was preparing for JEE (Mains) from a private coaching institute in Patiala since Class IX and have been staying in a hostel for the past three years for constant preparations,” he said.

Not an internet-savvy person, Ujjwal said he avoided being on the social media throughout his preparation. He also avoided smartphones and studied for a minimum of six hours a day. He said he focused on his mistakes and made sure that he never repeated the same mistake ever again.

A resident of Kartar Nagar here, Ujjwal said, though the Covid outbreak put a break on his studies for a few days after he got stuck in Jalandhar due to the lockdown, he continued with his preparations by mostly solving mock tests. He said the lockdown made him stay here for over 100 days, which was the longest period he stayed at his home after he started his engineering preparations.

“I only prefer studying at my own space and surrounded by family sometimes is a big distraction. So, I mainly focused on solving practical errors. Thereafter, when I reached my hostel, I took help of online coaching to stay connected with my teachers,” Ujjwal, son of Naveen Kumar Mehta, a financial manager in a private company, said.

Avval Amil, the second topper, said he was now preparing hard for the JEE Advance and aims to take admission to one of the top IITs in India. “My score of the January exam wasn’t that good, so I appeared for the exam again this time, as the lockdown gave me enough time to improve my rank. I kept a very easy schedule and after going through the lessons, I made it a point to revise it thoroughly the very same day,” he said.

The district third rank topper, Tanish Gupta, said he aspired to become a computer science engineer in future and that he was at present working hard to get a good AIR in JEE Advance, too, so that he gets admission to a top IIT. He credited his success to his mentors and parents.

Similarly, Sarthak also focused on self-revision and thorough understanding of the entire syllabus for getting good marks. He said he took coaching to get a good hold on his subjects. “To get through the exam, one needs to maintain consistency throughout the preparations. Study hours can vary, but studying daily is important,” he said.

Meanwhile, over 100 students from different schools in the city qualified for the JEE Advance, recording their positions in the all-India rankings. The JEE Advance exam is scheduled to be held on September 27. The Advance exam was earlier called the Indian Institutes of Technology-Joint Entrance Examination (IIT-JEE).