Kapurthala police bust interstate gang of robbers with arrest of 5 : The Tribune India

was active in Punjab, UP, Haryana & Rajasthan 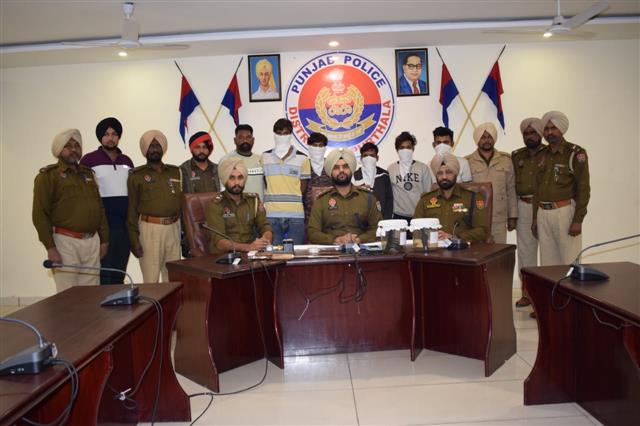 The police with the arrested men in Kapurthala on Saturday; (below) sharp-edged weapons and pistols seized from them. Tribune photos

The Kapurthala police have nabbed five members of an inter-state gang of robbers and recovered various stolen vehicles from them. 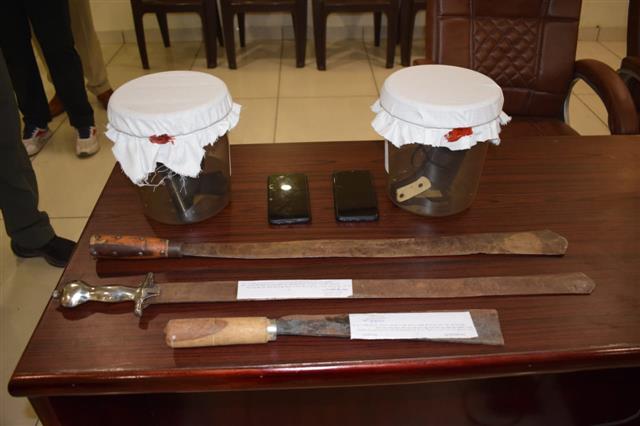 The total recoveries from them so far include an Innova, a country-made pistol, an air pistol, two stolen motorbikes and three datars.

At 10.30 pm on November 17, the liqour vend near the Lei Vala Jhall turn was attacked by five unidentified men in an Innova car, which had its number plates covered. Armed with weapons, these men hurt one of the vend employees after approaching him on the pretext of buying beer. They wounded him with a datar and snatched away Rs 1,200 from him and Rs 4,000 from another employee. The police lodged an FIR at the Sultanpur Lodhi police station against the five men on November 18.

The police arrested two of his associates — both Gurpreet — on November 20 with two stolen motorbikes (which had been snatched from Dalla Road and Malsian Road by threatening people with sharp-edged weapons).

On Sunny’s revelations, on November 27, a desi katta (local-made pistol) was recovered; on Gurpreet’s revelations, an air pistol was seized. On November 28, the gang mastermind, Balraj Singh, and aide Gurpreet Singh were arrested from Lohian Chungi, Sultanpur Lodhi, on a tip off.

The gang, with radium-plate pasted on to Innova, indulged in snatchings and vehicle robberies, the police informed. During investigation, members revealed that they had stolen Innova on the pretext of hiring it for Rs 5,500 from Bareily to Muradabad on November 16. On the way, they threatened the driver with sharp-edged weapon, injured him and stole the car. A case has been registered at the Gajrola police station in UP under Section 394 of the IPC regarding the same.

By using the stolen car, a Haryana-based bank manager was also robbed of Rs 1,50,000 after being hit with a rod on his head. They had also been carrying out various small snatchings and robberies in Punjab.

The police revealed that Balraj bought illegal weapons from Saurabh and carried out robberies in Punjab, Haryana and Rajsthan with them.