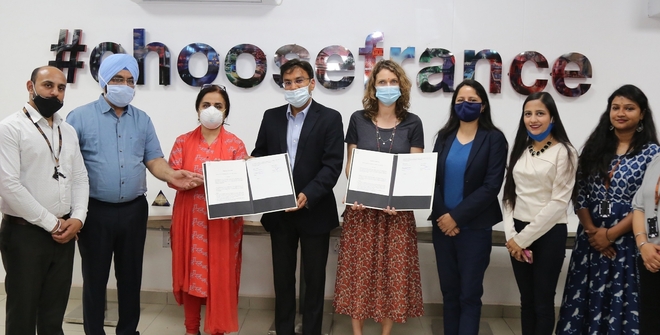 Jalandhar: LPU has signed an MoU with Alliance Française, Chandigarh, (AFC) to impart the French language and culture on its campus. Recognised by the French Embassy in India, Alliance Française de Chandigarh has played a pioneering role in promoting the French culture since its inception in the region. It is also important to note that the French Embassy in India has already established an e-space France Centre at the LPU campus in 2019. On the occasion, Director Ophélie Belin of AFC and LPU Registrar Dr Monica Gulati signed the MoU, in the presence of the Additional Director at the Division of International Affairs at LPU. Prior to this, Ms Ophélie Belin was accorded traditional Punjabi welcome at the centre. HoS Social Sciences and Languages Aman Mittal assured his full support in all future endeavours slated together as per the MoU. It was also shared why one should learn the French language and culture. Importance of the language for various purposes such as study, career, tourism, cultural learning, scientific knowledge, social life and sports in France were also discussed.

Foundation day of the Arya Samaj was celebrated at Hans Raj Mahila Maha Vidyalaya here. Legacy of the Arya Samaj and the institutions started by it were also remembered on the occasion. The Arya Samaj’s contributions towards women education were also highlighted. A havan was organised by the Vedic Adhyayan Society of the college. Principal Dr Ajay Sareen said the institutions started by the Arya Samaj are playing a significant role in women education. “They started women education institutes because they knew that women can educate the whole society,” he said. Dean Academics Dr Kanwaldeep Kaur also congratulated all on the occasion. Head of the Hindi Department Dr Jyoti Gogia said the Arya Samaj is the basis of a new era. All members of teaching and non-teaching staff were present. The stage was conducted by Head of the Sanskrit Department Dr Meenu Talwar.

Eklavya School celebrated Cosmonautics Day. As Cosmonautics Day is an anniversary celebrated in Russia and in some other former USSR countries. This day is also celebrated as international day of human space flight in dedication of the first manned space flight made on 12th April 1961.To celebrate this day Eklavya School organised some activities. Speech was given by Anoopdeep Kaur of Class VI in which she highlighted how this day is treated as celebration to commemorate the first man in space. Videos were shown to students through which they came to understand the several aspects of science and technology and its growth in the last few decades. To celebrate this day students made creative collages and shared their thoughts regarding this day. Chairman JK Gupta said such kind of awareness motivates students to do some extraordinary in life. Director of the Eklavya School Seema Handa and the Principal appreciated the efforts done by students.

The department of history, Kamla Nehru College for Women, Phagwara, organised a webinar on Jallianwala Bagh massacre to pay homage to the martyrs of the freedom movement. Dr Savinder Pal, the college principal was the keynote speaker. She discussed all the aspects of this tragedy. She shed some light on the establishment of British rule and how they annexed the Indian territory slowly and gradually. She also talked about the legal framework of the country. While discussing the impact and importance of Jallianwala Bagh, she also enlightened the literary aspect of this incident. She expressed her desire that for the smooth running of an administration we must learn a lesson from history. The system must not misuse its powers rather proper coordination and cooperation should be there. Kamlesh, convenor of the webinar, expressed her gratitude to the speaker and all participants. Dr Asha, HoD, Department of Hindi, KNCW thanked Dr Savinder for the knowledgeable webinar. Prof Neelam Sethi also congratulated and praised Dr Savinder for providing a modern perspective to the existing scenario.

The faculty of Agricultural Sciences at DAV University Jalandhar organised a webinar on “Recent Advances in Plant Genome Engineering”. The lecture was delivered by Dr K C Bansal, Ex-Director, National Bureau of Plant Genetic Resources, ICAR-DARE, New Delhi. Dr Rahul Kumar, Assistant Prof, Faculty of Agricultural Sciences welcomed the speaker and all the participants. The webinar was inaugurated with introductory note of the officiating dean academics, Dr Raj Kumar Seth. Dr Bansal initiated his lecture with the historical aspects, advantage, challenges and techniques of traditional breeding methods to improve plant characters. Later he emphasised on the applications of emerging tools of plant biotechnology to raise agriculture production and to mitigate biotic and abiotic stresses. He explained the relevance of transgenic crops and molecular breeding approaches.

The Faculty of Hospitality of GNA University bagged a lifetime membership of World Chefs Choice Federation (WCCF) and a lifetime subscription to the Chefs Choice magazine. WCCF awarded this certificate to GNA University. The lifetime corporate membership certificate was presented by Chef Jatinder Dhir – Acting president of WCCF India and Chef Subhadip Mazumdar - Sr vice-president of WCCF India to Gurdeep Singh Sihra – president and Pro –Chancellor, GNA University. World Chef Choice Federation is an association of new era which enables connectivity between professional chefs, academicians, bloggers, students and home chefs. WCCF believes in growing the chefs’ community by providing a platform where they can express their culinary thoughts. tns