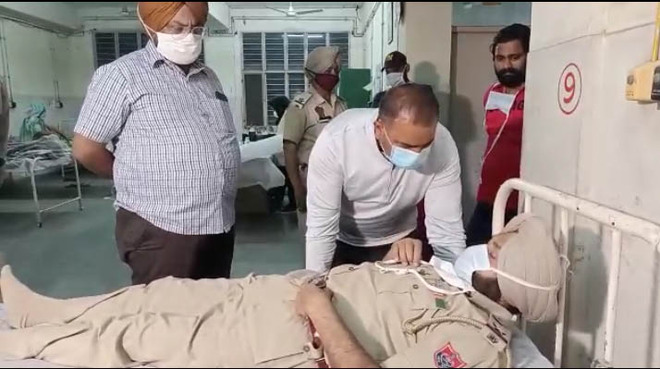 A Station House Officer (SHO) was reportedly thrashed by a group of four persons here on Saturday midnight. The victim was admitted to the Civil Hospital. The police also managed to arrest two of the accused persons, including a merchant navy officer.

At around 1.45 am on the intervening night of Saturday and Sunday, four men manhandled the SHO posted at the Bhargo Camp police station. The SHO, Inspector Bhagwant Singh Bhullar, was covering his midnight domination duty when the incident took place.

“With just 15 minutes left for my duty to end, I saw four men standing outside their friend’s house near Mata Rani Chowk. Subsequently, I went up to them and inquired as to why they were out during the curfew hours. They started arguing and hurled abuses at me.

“While I tried to take them into police custody, one of the youths punched me on my nose and I started bleeding. Within a few seconds all of them attacked me. Meanwhile, my gunman and the driver who were at a distance reached the spot and caught hold of the accused. One of the accused also tried to snatch the AK-47 rifle of my gunman. A PCR van and ACP (Traffic) Harwinder Singh reached the spot and took control of the situation,” narrated the SHO.

Taking stern cognisance of the assault on the SHO, the Commissionerate Police have arrested two of the attackers whereas Commissioner of Police Gurpreet Singh Bhullar has constituted special teams to nab the other attackers.

Those arrested have been identified as Manpreet Singh, a merchant navy officer, and Kamaldeep Singh, both are residents of Model House. The absconding accused were identified as Harmandeep Singh and Avtar Singh.

Bhullar said raids were on to nab the remaining two culprits. A case under Sections 332, 333, 186, 353, 188 and 34-B of the IPC had been registered against all the accused at the Bhargo Camp police station. An ASI of rural police was allegedly thrashed by a local resident on April 3 during the curfew hours.

The victim, ASI Manjit Singh, deployed as Munshi at the Kartarpur police station was reportedly going to attend his duty at around 10 pm from his village in Talhan. After covering a few kilometres, he saw the accused standing on the road with his friend. He pressed the horn of his car to cross the road which was blocked by the accused. The accused not only thrashed the cop but also plugged his stars from his uniform.