Open House: What should the government do to improve the poor condition of roads? 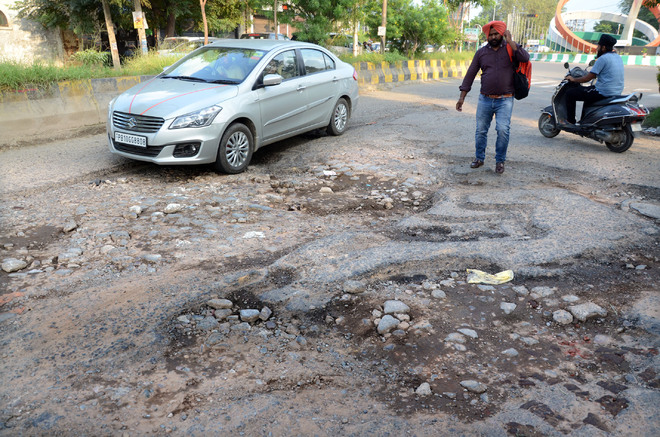 Plight of Ladowali road Complaints regarding broken roads and footpaths always remain unanswered on one pretext or the other, say residents. Sarabjit Singh

Corruption is the root cause of the problem

Condition of roads is very pitiable. Potholes and poor roads don’t just make driving a hellish experience, sometimes they cause serious accidents. The problem is getting worst year after year. Roads are not repaired and most of the potholes are filled temporarily. Complaints regarding broken roads, footpaths are always unanswered with an excuse. Nobody took a notice and care a damn about it. The MC, PWD are directly responsible for it. Crores of rupees have been sanctioned for the repair and maintenance but nothing happens on the ground. If something is done, it’s just an eyewash. When the people pay taxes, it’s the responsibility of the government to ensure the maintenance and repair work. It is always a blame game. Everybody wants to come out clean and blame others but the fact is all are responsible. Actually, corruption is the root cause of all this. Each and everyone take their share, don’t raise a voice and sit quietly. MP’s and ministers should pay a visit time to time to check the development work done and fix the responsibility and punish the guilty. Unless and until law is not strict, the situation will remain the same.

The poor conditions of city roads can be attributed to many reasons. One prominently is lack of effective mechanism of proper maintenance of roads after they are laid out. No original tender with any construction firm without well defined provision for maintenance of allotted road up to minimum one year, should be approved. A part of payment money should be withheld to be released only after full compliance with maintenance contract. The other primary reason is poor quality of the roads. Either the quality controls as per latest standards are not maintained in the tendering process itself or are woefully compromised later due to corrupt nexus between the contractor, bureaucrats and the politicians. It appears as if we have to live with poor infrastructure similarly we are living with corruption and inefficiency in every public domain including local governing bodies.

Reasons for potholed roads and the way forward

Mismanagement of funds must be stopped

The present condition of roads is worrisome. The Municipal Corporation has failed to maintain roads and carry out patch works, which have created a panic situation for the vehicle owners. The poor conditions of the roads are creating inconvenience to the commuters. Due to big potholes most of the people in Jalandhar are now facing health issues. Officials concerned should be made responsible for the negligence and for not carrying out the repair works. City residents have a lot of expectation from the Municipal Corporation. Funds released for carrying out development works under the Smart City project should be utilised for providing basic civic amenities to the public. The Deputy Commissioner should revive grievances committee so that the members can take up the matter with the committee and highlight such issues.

The Patara road, which connects a number of villages, lies in a terrible shape. It has not been repaired from a long time. The potholes on the road are a major cause of concern. The authorities have turned a blind eye to the inconvenience faced by the public. There should be a proper agreement between contractors and the government. Ditches and potholes are a chronic problem that reduces the life of roads. They should be immediately taken care of by the government. It will reduce road accidents and problems faced by public. There should be proper monitoring of roads by government. Corruption should be stopped. This is also a main reason why roads are not properly built. We all pay taxes to the government and its government’s duty to make sure that road are properly built. Last but not the least, it’s the government only who can improve the condition of roads. Government officials should check the condition of roads properly.

An open invitation to road accidents

All intersections in the city are inundated with water during the rainy season. Potholed, damaged roads in almost every part of the city increase the chances of accidents especially, due to waterlogging. But the civic authorities are least bothered about the pitiable condition of the public during such times. The PWD engineers are in cahoots with the local politicians in this sordid state of affairs. The interlocking tiles put on the streets and roads are manufactured by industries owned by politicians of different parties. The coal tar and bitumen used in laying the roads are so faulty that they get dissolved in the first shower of rain. No wonder that people suffer so many accidents resulting in loss of lives and limbs. The government should enforce independent agencies of qualified and honest officials to supervise the construction of the roads and also lay down proper drainage system so that the rain water doesn’t stay or collect on the roads and intersections. Sometimes the rain water enters into the houses of the people living in low lying areas. There is a danger of malaria and dengue in such conditions. The municipal officials should be taken to task and suitably punished for such shoddy work so that it serves a lesson for others.

The poor condition of cities roads is not only causing hardships to commuters but also causing many problems such as accidents, waterlogging due to poor drainage system and bad conditions of roads. Accidents on highway city roads been a big issue since many past years but no one has taken a single step towards these conditions. Well constructed roads are the most essential within a city. If it’s not been under proper construction and care of the government, it will cause a heavy damage to the lives of travellers, two-wheelers, daily commuters also to the loaded trucks and tractors. So, properly constructed two-way roads and plants on both sides and with proper drainage system is a must. Moreover, there must be proper zebra and light poles so that there will be convenient system for the daily commuters. With a proper construction of these roads it not only downs the accidents but also avoids many problems such as traffic jams, collection of muddy water during rainfall season and many more. So, in order to provide convenience as well as for the development of a city the most essential and first prioritise thing is the proper construction so in order to improve the conditions of roads.

The poor condition of city roads have been causing great hardships and leading to deadly accidents on a daily basis. This is not a problem that can be ignored. Roads are something that each one of us uses and that enough is a proof of how much weightage it holds in everybody’s daily life. The local governments should step in and take immediate actions to bring the situation under control. Strict laws should be made to control the tearing up of roads by common public for domestic reasons. Speed breaks should be made wherever over speeding issues has caused accidents. Traffic road signs, traffic signals, zebra crossings, etc. should be kept well maintained.

I want to bring your kind attention to poor condition of link roads of central area. Numerous dwellers faced heavy and prolonged rains this time and as a result, the roads have turned into big potholes. Needless to say, the dividers and side marking lines have faded too, which leads to accidents. Also many residents lost their lives due to potholed roads. In the end, there must be a concrete plan for carpeting roads. There must be one inspection team to inspect conditions of roads area wise and should report to MLA’s of that area. Then nobody should be allowed to dig the roads.

Improvement in city infra is vital

In the past few years, remarkable work on building and expansion of highways is visible but the condition of roads in the urban areas continues to be in a bad shape. During the rainy season, there is acute waterlogging on the roads. The drainage system is so poorly managed that huge potholes appear on the roads due to light showers. Besides this, sewerage pipes get choked and manholes are left uncovered. As a result, mosquitoes breed on stagnant water and spread diseases such as malaria and dengue. Consequently, the health of numerous people is badly affected while the polluted environment gives shabby look to the surroundings. It is, indeed, ironical that the prescribed traffic rules and the construction by-laws are openly flouted. Due to rampant corruption, construction quality is invariably compromised by the contractors in connivance with the authorities. Municipal bodies responsible for maintenance of city roads and allied infra are paying no timely attention to the warning bells. While the citizens are paying all kind of taxes, they are made to suffer by tagging the unpleasant incidents merely to the vagaries of weather. To check such malpractices, local NGOs and civic societies should be empowered to supervise the construction activities carried out by contractors. Strict action should be taken against officials for violations of rules and misappropriation of funds at any level. The inconvenience faced by the public due to the poor management of roads must end.

With the district reporting a surge in dengue cases, what steps should be taken by the Health Department and civic body officials to stop breeding of dengue larvae and how should they raise awareness among the public to stop the numbers from rising?

Suggestions in not more than 200 words can be sent to jalandhardesk@tribunemail.com by Thursday (September 23)