With increase in Covid cases, it’s back to square one in district 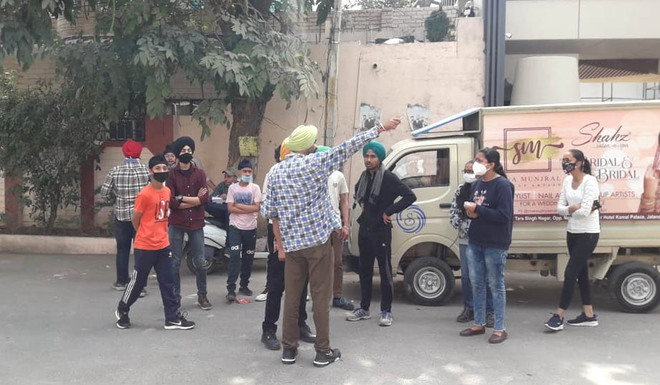 Parents and students protest outside a private school in Jalandhar on Thursday. Tribune Photo

After 270 positive cases were reported from the city on Thursday, parents of wards going to schools or about to appear for annual exams are a worried lot.

Reason: A large number of students and teachers are reporting positive on a daily basis. Parents have been demanding that the mode of examination be changed to online from offline, as they do not want to send their kids to schools. Many schools had earlier issued instructions that students from Class VI onwards will appear for offline examination, while those in primary classes will take online exams. But as more cases began to be reported from schools, parents began approaching the authorities to exercise liberty. Later, numerous schools changed the plan and called only Class IX and XI students for offline exam and asked others to continue with online exams.

Parents of kids studying at Guru Amar Dass Public School reportedly went to the institute to request the management to ensure that students of Class IX and Class XI also should not be asked to appear for offline exams. The school authorities told them that proper standard operating procedures (SOPs) were being followed and their children were safe. At last, parents gave a written request and the authorities said they would get back to them.

Meanwhile, most government schools have been adamant. A parent of a Class IX student of GSSS, Nehru Garden, shared an audio where a teacher sent a voice message to students to ensure 100 per cent attendance during their practical exam, which was held today. It’s learnt that many students preferred to skip the exam.

Numerous school authorities have gone for a rethink and find a solution. Rashmi Vij, Principal, Police DAV Public School, said, “We are calling students from Classes VI to XII for taking the exam. Classes X and XII are also taking pre-boards these days. When we announced offline exams, the situation was far better, but now it’s grim and we are still thinking how to go about it. We somehow wanted that students take their final exams in schools, so that they prepare well. The online examination, I feel, was only a mockery.”

Vij, said, “We ensure that students practise social distancing, head straight to their seats and go back home in the same manner. We have told students and teachers that we will be liberal with them in case anyone in their family is sick. We will either reconduct their exam later or give them average marks.”