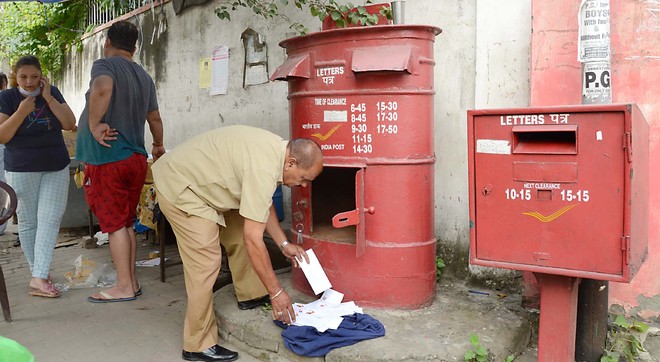 A postman takes out all the letters dropped in the mailbox.

Remember the days when there were no mobile phones and access to internet and email was very limited. Everyone used to stand near the gate of the house past noon waiting for the arrival of khaki-dressed postman. There used to be much excitement as he would hand over blue colour inland letters, postcards or money orders. In all this, one attraction used to be collection of rare, commemorative postal stamps and cards.

That era long over, the Department of Posts still exists even though there are just about only a handful of letters being posted using the postal mail. Against nearly 500 letter boxes that were fixed at various points of the Jalandhar division, there are nearly 370 now. While some have a letter or two coming daily, there are others where there is not even a single mail arriving even in a span of few weeks. But the dedicated postmen still care to open them after a few days.

Even the number of postmen has fallen by 60 per cent from the number that was there in 1985-86. Says Senior Superintendent Posts (SSP), Jalandhar Division, Narinder Kumar: “The work load of postmen has fallen drastically. The inland letters have almost vanished. Even we get to see them very rarely. The postcards are limited to just some government companies like LIC, which are in the form of their printed notices for sending these to their customers.”

Narinder Kumar added: “Keeping our department’s commitment to service the community based in the remotest of areas, we have diversified ever since and diverted our staff for other works. Our primary job now remains dispatch of parcels. Like courier companies, we too are doing business with e-commerce companies. Companies like Amazon have tied up with us for delivery of couriers, especially in all those places where the courier companies refuse to go. We are delivering parcels in isolated villages. Our department has staff that delivers parcels in less frequented areas of Himachal Pradesh and J&K.”

“During peak corona days, when most companies had reduced their workload, our employees continued to deliver articles at doorsteps. We were using trains and buses for delivery of parcels, but transport had also stopped. Ever since, we have started using our own parcel vehicles for delivery,” says the Senior Superintendent Posts.

Another area where the Department of Posts is doing a good business is saving schemes. “We have postal ATMs also at 1,500 locations in India, including in General Post Office Jalandhar City, Jalandhar Cantonment and Nawanshahr.”

Narinder Kumar, who has 40 years of work experience in Jalandhar, shared that there are other multiple roles of Post Office now. “We are also into online digital payment through National Payment Corporation of India. Our postmen and gramin karamcharis are going in the most interior areas to make payments via Aadhaar-enabled machines. They take thumb prints and authenticate user using phone and Aadhaar details.”

World Post Day is celebrated each year on October 9, the anniversary of the establishment of the Universal Postal Union in 1874 in the Swiss Capital, Bern. It was declared World Post Day by the UPU Congress held in Tokyo in 1969. The theme of the day this year is: Innovate to recover. The department, too, seems to be proceeding in the same direction.