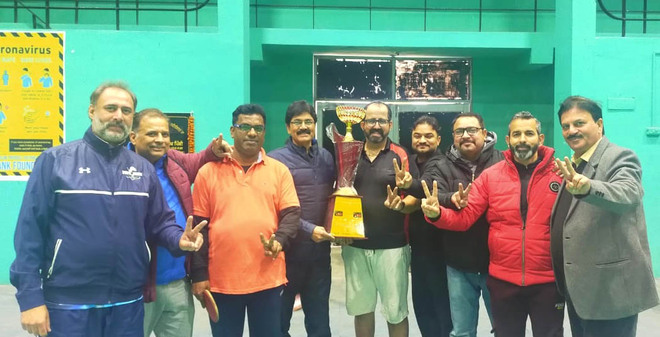 Jalandhar table tennis team players pose with the trophy after winning the finals at the Master’s Tournament held in Ferozepur. Tribune Photo

The finals of the Table Tennis Master’s Tournament were held on Sunday, in which veteran players from far-off places, including Shimla, New Delhi and Bengaluru participated.

Jalandhar TT coach Manish Bhardwaj, who participated in the tournament held in Ferozepur, on Monday, said: “A very interesting turn of events took place. For the first time in the history of Punjab table tennis, toss was done in the finals because of bad weather and fatigue of both finalists, including me and Heera Goswami. It was decided that whatever will be the result of the toss, the prize money would be shared equally.” Heera won the toss.