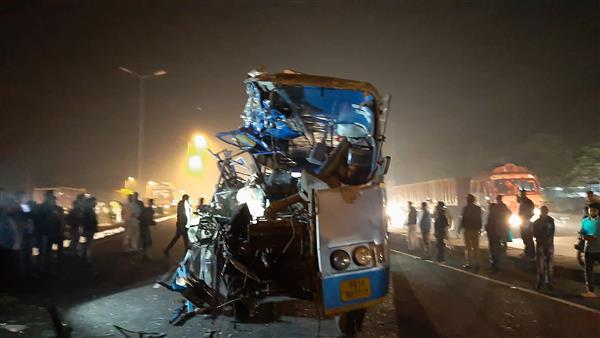 Mangled remains of the PRTC bus, which met with an accident on Tuesday evening.

The Kartarpur police on Wednesday registered a case against the truck driver, who rammed his truck into a PRTC bus near Jang-E-Azadi war memorial, on Tuesday night. The incident was reported after the commuters raised hue and cry and rushed to rescue the injured passengers on the bus. The intensity of the collision was such that the roof of the bus blew off with in seconds and the conductor fell on the road from the windshield of the bus.

The also accident left the driver of the bus dead and 15 passengers injured. The victims were immediately rushed to the Civil Hospital, where doctors declared the driver brought dead. The deceased was identified as Kuldeep Singh (43), a native of Patiala. Survived by his wife and two children, he was the sole breadwinner in his family.

The SHO said it took them over an hour to safely evacuate passengers from the damaged bus. The injured truck driver, identified as Harpal Singh, a resident of Sangrur, was also taken to the hospital.

Investigation Officer (IO), ASI Kulbir Singh, said: The truck driver was coming from Amritsar and was in an inebriated state. He reportedly took the wrong side after failing to find any cut on the highway.

“While the passengers with minor injuries were discharged from the hospital late in the night, around five victims were referred to NHS hospital for further treatment,” added Kulbir.

As per the reports, there were 20 passengers in the bus and it was heading towards Gurdaspur from Jalandhar city bus stand. The IO said the bus was within the speed limit as it left the city bus stand at 7.19 pm and reached the accident site around 7.50 pm.

As the truck driver is still receiving treatment at the Civil Hospital, he will be presented in the court after recovering. A case under Sections 279, 337, 338 and 427 of the IPC has been registered against the truck driver at the Kartarpur Police station.