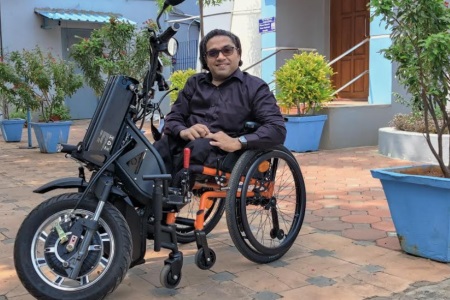 Researchers at the Indian Institute of Technology (IIT) Madras claimed to have developed India's first indigenous motorised wheelchair vehicle that can be used not only on roads but also on uneven terrains.

Called 'NeoBolt', it has a maximum speed of 25 kmph and travels up to 25 km per charge. It empowers wheelchair users with a convenient, safe and low-cost mode of outdoor mobility when compared to cars, auto-rickshaws or modified scooters, they said.

NeoBolt is powered by a lithium-ion battery, the researchers added.

According to the team, India currently imports 2.5 lakh of the total three lakh wheelchairs sold in the country annually. Products with comparable features are available only in the global market and are three to five times more expensive than those developed by the IIT Madras researchers.

The researchers collaborated extensively with organisations and hospitals working for people with locomotor disability and built the products after factoring in their experiences and making constant design adjustments, the team said.

While the wheelchair has been developed by the institute's Centre for Rehabilitation Research and Device Development, it has been commercialised through a startup called "Neo Motion".

Sujatha Srinivasan from the Department of Mechanical Engineering, IIT Madras, said the wheelchair will be available to users at an approximate price of Rs 55,000.

"The motor-powered attachment, NeoBolt, converts the wheelchair into a safe, road-worthy vehicle that can navigate any kind of terrain that we may normally encounter — drive through unpaved streets or climb a steep gradient. And do this comfortably as it has suspensions to absorb the shocks," Srinivasan said.

"Products with features comparable to NeoBolt are available only in the global market and are at least three to five times more expensive," she added. PTI