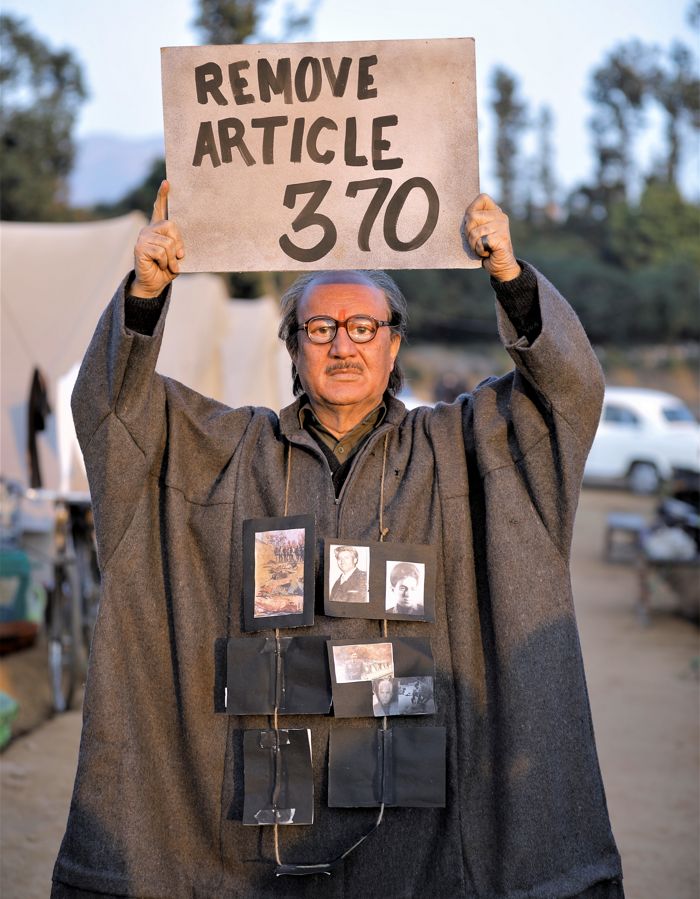 The truth of 'Kashmir files' is stuck like a thorn in the throat of some people... — Anupam Kher

Vivek Agnihotri’s The Kashmir Files that dealt with rather a sensitive subject, and went to become a surprise hit minting Rs 340.92 crore at the box office, has been a talking point ever since its release in March 2022. Opened to mixed reviews, the film was hailed for powerful performances, making it to second highest-grossing Hindi film of 2022.

The film is back in the eye of the storm as at the just-concluded International Film Festival of India (IFFI), jury head Israeli filmmaker Nadav Lapid criticised it on stage, calling it ‘propaganda’.

Lapid said, “We were, all of us, disturbed and shocked by the 15th film, The Kashmir Files. That felt to us like propaganda, vulgar movie, inappropriate for an artistic competitive section of such a prestigious film festival.”

His comment stirred a hornet’s nest, with Israeli Ambassador Naor Gilon calling Lapid out in a series of tweets. IFFI jury members have distanced themselves from Nadav Lapid’s criticism, the film fraternity joining in the din.

Actor producer Mukesh Rishi is as shocked as many. “I am surprised at Nadav Lapid’s statement. I was there at that session–how he summarily rejected the film was unfathomable. I wonder what in the film struck him as a lie or propaganda.” He adds, “Had he researched and then come up with a responsible statement. Though Israeli ambassador has felt sorry, it’s still unacceptable,” he says.

Actor Darshan Kumaar said, “Everyone has their own individual opinions on anything they see and perceive …. But one can’t deny the fact is that The Kashmir files is a film which has depicted the actual plight of Kashmiri Pandit community… who are still fighting for justice against the brutal acts of terrorism… so this film is not on vulgarity but on reality.”

Filmmaker Rahul Mittra, “Well, I still haven’t seen The Kashmir Files, so I am not in a position to comment. I know for a fact that the film was a blockbuster, which meant that it was able to engage the audiences. As far as Israeli filmmaker Nadav Lapid’s remark against the film is concerned, I feel that he used the platform to spell out his personal thoughts. Calling The Kashmir Files ‘vulgar’ and ‘propaganda’ was uncalled for. Everybody has the right to their opinions but should exercise restraint in expressing them,” he says.

Team The Kashmir Files has stood for their film. “If holocaust is right, the exodus of Kashmiri Pandits is right too. Seems pre-planned as immediately after that the toolkit gang became active. May God give him wisdom,” said Anupm Kher in an interview, whose sensitive act in the film was lauded. Kher also tweeted “The truth of ‘Kashmir files’ is stuck like a thorn in the throat of some people... But our film is now a movement and not a film.” Vivek Agnihotri, who has written and directed the film, posted, “Truth is the most dangerous thing. It can make people lie. #CreativeConsciousness.” His wife Pallavi Joshi, who co-produced the film and played a negative role in it, took to Instagram, “Vivek and I were aware that some elements would not like to see the stark truth on screen, but it is very unfortunate that a creative platform was used for a political agenda to preserve an old, false and jaded narrative about Kashmir. ”

Lapid’s comments also met with stiff resistant within Indian film fraternity, singer-actor Suchitra Krishnamoorthi, “Shocked to hear #Israeli director calling #KashmirFiles a Vulgar Propoganda film!!! It’s the most vulgar statement I’ve ever heard... Who gave this monkey a mic?” Film trade analyst Sumit Kadel shared, “#TheKashmirFiles has created discomfort amongst many. There’s a Big Lobby working to slander this film’s intent & credential. Statement made by a foreigner in IFFI is a fine example. A BO website is also making continuous efforts to discredit film BO success. Appalling to see this.”

While many have maintained silence, known for bold stance actor Swara Bhasker sharing a piece on Lapid’s comments tweeted, “Apparently it’s pretty clear to the world.” Comedian Kunal Kamra tweeted, "Indian government must boycott Pagasus spyware & bhakts must stand in solidarity with the just cause of Palestine…"

Filmmaker Sudipto Sen, who served on the jury of the just-concluded International Film Festival of India (IFFI), took to Twitter to state that the opinion of Israeli screenwriter and director Nadav Lapid on The Kashmir Files was not shared by his colleagues on the jury. It is completely in a personal capacity.”

Nadav Lapid has been to India earlier and is a much awarded filmmaker. But it was not until his blunt criticism of "The Kashmir Files" that Israeli director Nadav Lapid hit the headlines, and had people scouring the net to find out more about him. The director of Policeman and The Kindergarten Teacher had earlier aired his views on the Indian national anthem being played at the opening ceremony of the festival. He also said he is not participating as an ambassador of Israel but an artist willing to experience different cultures.