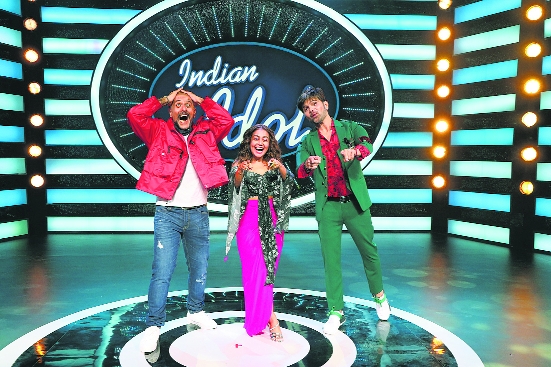 If television as an industry has taken a hit after the Maharashtra government stopped all shoots for the time being owing to the surge in pandemic in Mumbai, reality TV, more than fiction shows, could be the bigger sufferer.

“Non-fiction shows require huge sets and infrastructure. A lot of planning has to be done on a big level. Contestants come from different cities, and their accommodation and everything else is a huge responsibility. It is a costly affair,” he says.

While Indian Idol 12 moved to Daman for now, there is also a new panel of judges. The show used to be judged by Neha Kakkar, Himesh Reshammiya and Vishal Dadlani. Since they couldn’t travel due to prior commitments, lyricist Manoj Muntashir and composer Anu Malik are now judging the show.

Madhuri Dixit, who was a judge on the show is not travelling, and dancer-actress Nora Fatehi will be taking her place alongside Tushar Kalia. Dharmesh Yelande has also returned to the show but Raghav Juyal’s place has been filled by comedian couple Bharti Singh and Haarsh Limbachiyaa.

The biggest reality show on television today, Indian Pro Music League, will not be shifting. Singer Kailash Kher, an integral part of the show, says that the show has a spectacular set-up and can’t be shifted. The show could run old episodes if the lockdown doesn’t open on time.

“We are hoping that the shoots resume. We cannot go to other locations. The set is like a Hollywood studio set. This is the first time that the production is on such a grand level. We have huge LEDs on the set. When you look at the LEDs, you feel larger than life. The set is huge and the production value is very big. It looks like an international concert set. It is the life of the show and we cannot move it,” he says.

“We hope the lockdown opens quickly. The country has seen a lot of sadness. We hope we can resume. Till then, the episodes which have been aired, we can telecast them again,” Kher sums up.—IANS