Flee on bike with third accomplice waiting outside showroom 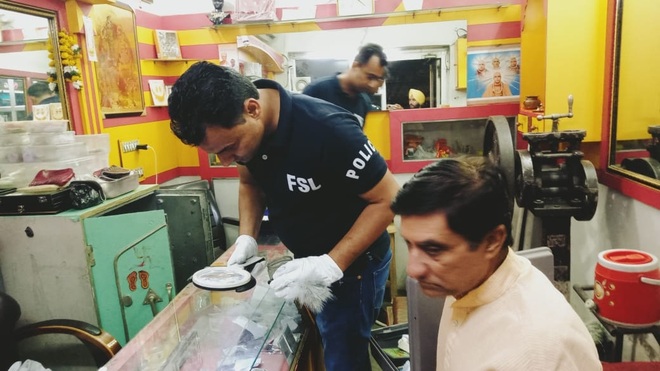 After the incident, ADCP Sameer Verma, ACP Talwinder Singh and police personnel from the PAU police station along with dog and finger print squads reached the spot.

Kiran Verma, owner of the showroom, said yesterday night when he was about to close the showroom, two masked youths barged into the showroom and before he could ask anything, they pointed weapons at him.

“The robbers asked me to keep quiet else, they will shoot me. Later, they went towards the safe and took gold worth Rs 7 lakh. They also ransacked the entire showroom and looted Rs 3 lakh in cash as well,” he added. After looting cash and gold jewellery, the two miscreants fled on a motorcycle along with their third accomplice, who was waiting outside the showroom.

The jeweller had not installed CCTV cameras in the showroom, despite the instructions given by the police to them regarding the same. Sources said when the incident took place, there was no police naka on Hambran Road, due to which the robbers managed to leave the spot easily.

ADCP Sameer Verma said the police were working on various theories to get any clue about the robbers and CCTV camera footage recovered from the area was also being scanned. He added that the case would be cracked soon. A case had been registered in this regard on Wednesday.

The jeweller has failed to install CCTV cameras in the showroom, despite instructions given by the police to all jewellers in the city in this regard.