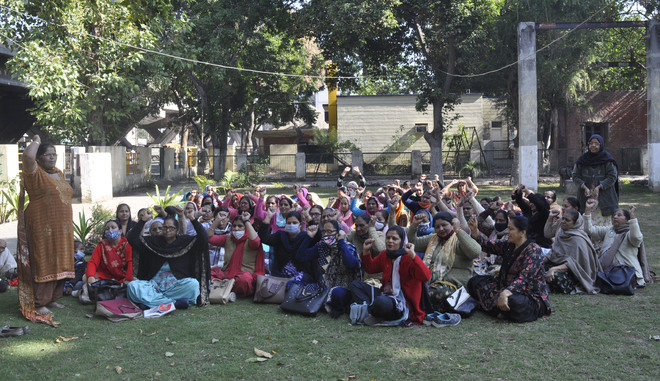 Aanganwadi workers during a meeting at Chatar Singh Park in Ludhiana on Saturday. Photo: Inderjeet Verma

Members of the Anganwadi Mulazim Union, Punjab, met at Chatar Singh Park here today and decided to be a part of the nationwide strike of trade unions on November 26.

Union general secretary Subhash Rani said the entire country was protesting against the undemocratic policies of the Central Government. “The government came into power with a promise of development, but it is now working against its own people,” she said.

“Now, the government is also privatising education. In the New Education Policy, the government has ignored those working from the past 45 years and have given preference to private playway schools,” she said.

She said in 1975, the government had formed anganwadi centres that had helped in elevating the nutrition level of kids by 75 per cent as two meals were given to those coming to the centres. “But now, they have decided to include preprimary classes in schools due to which, kids will now go to schools instead of the centres,” she said.