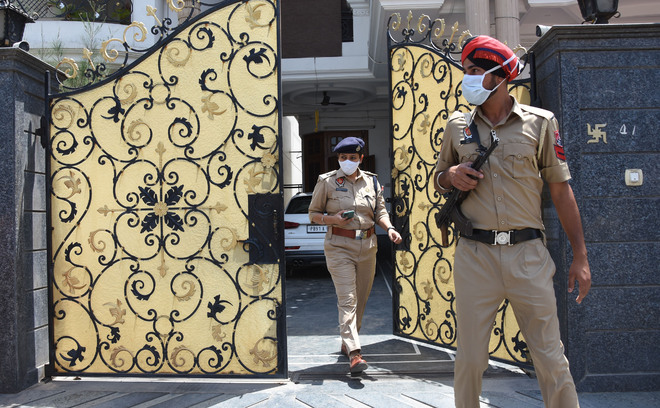 Cops at the victim’s house at Atam Park in Ludhiana. Himanshu Mahajan

A city-based businessman strangled his wife to death at their residence in Atam Park here on Friday.

The complainant, Rajan Kundra, deceased’s brother, said his sister got married to Harmesh in 1955. The couple had three children Lovenish, Ritika and Parmesh. Parmesh had been living in Canada while his two siblings were staying in Ludhiana.

The complainant said his sister was running Aarti Boutique at Atam Nagar and she was also a director in a factory, Arora Alloys, in the Focal Point area.

“Her husband was greedy as he wanted to usurp her boutique. Recently, he also removed my sister from the director’s post by forging her signatures. On May 13, when I went to meet my sister, she was under depression. She also apprised me then that her husband and his family members were planning to kill her,” he said.

He said this morning, he had gone to pick her sister from her home. When he reached the place, he was shocked to see that her husband and other family members were putting her in a car. She was in an unconscious state.

“When I asked the accused what happened to her, they fled the spot. Afterwards, I rushed her to hospital where doctors declared her brought dead,” he alleged.