Commuters face the heat as employees protest on highway near Khanna 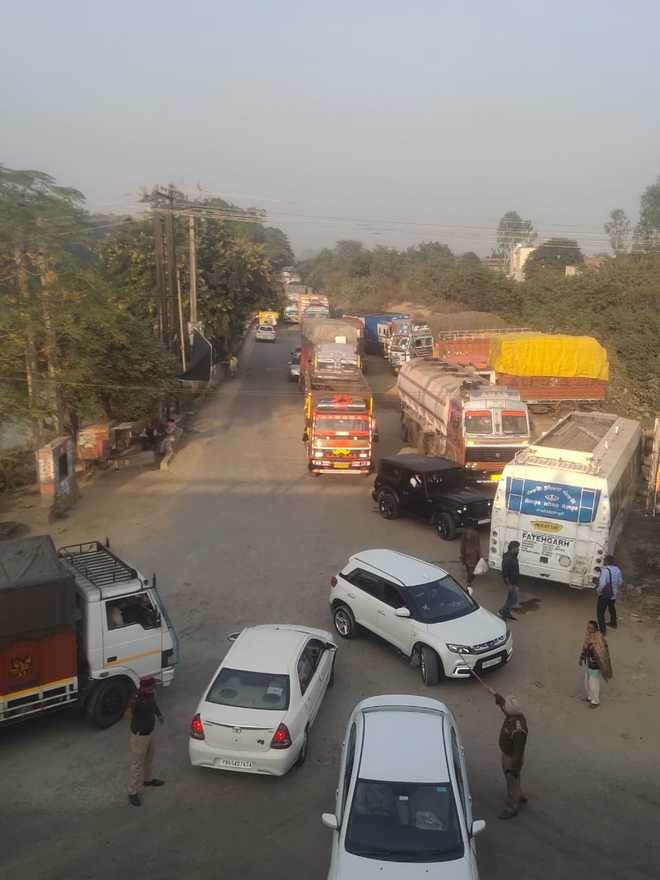 Vehicles caught in a traffic jam at Doraha on Tuesday.

Commuters here had a horrific time as the town witnessed a huge traffic jam after the contractual employees staged a dharna on the national highway near Khanna.

As the traffic came to a sudden halt due to the protest, the commuters were caught in the jam for nearly an hour with no way to go.

Doraha is my workplace. As I was returning home in Ludhiana, I realised that all roads were blocked. I had to wait nearly for an hour before the traffic was finally cleared. — A Schoolteacher

The police were on their toes as traffic had to be diverted to alternate routes and commuters managed to reach their destinations with great difficulty.

A commuter coming from Khanna after getting his brother checked at a hospital had to face great difficulty in reaching his home in Doraha.

The school and college students were the worst hit. It was only after the protest diluted a bit that they could reach home.

“Doraha is my workplace. As I was returning home in Ludhiana, I realised that all the roads were blocked. I had to wait nearly for an hour before the traffic was finally cleared. I reached home after 5 pm. My children were waiting for me. I generally pick them up from school on my way to home,” said a schoolteacher.

“The protesters have no right to create hurdles in the way of commuters. They should plan their protest in a way which does not affect the common man,” the teacher added.

“I have my coaching classes in Ludhiana… I need to reach the centre by 3 pm. But as I got stuck in the jam, I reached late to the class…it was almost over and I had to return annoyed,” said a college student.

DSP Payal Devinder Kumar said: “As we had analysed the situation beforehand, we began to divert the traffic. The vehicles coming from Delhi were shifted to one route while those coming from Ludhian were diverted to another route. It takes time to clear traffic congestion but with planned execution we were able to regulate it within an hour or so.”