Constructed before Assembly elections, Ludhiana's Tibba Road breaks up at many points : The Tribune India 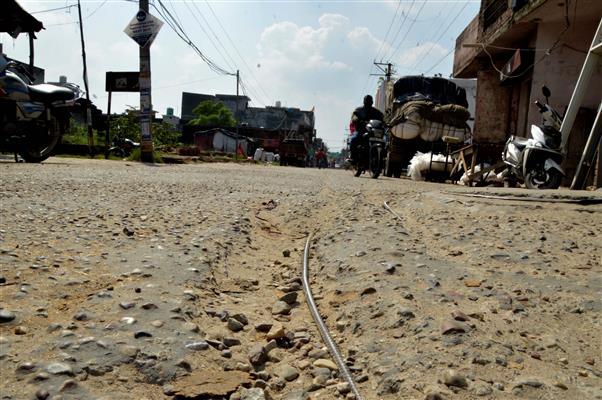 The stretch, made up of cement concrete, started breaking down within months of construction.

Within months after the construction work was done, Tibba Road here has broken at various points, raising questions over the quality of the material used. The road was constructed only a few months before the previous Assembly elections, which were held earlier this year, residents said.

Though the area falls under the Municipal Corporation, Ludhiana, this Tibba Road stretch was made of cement concrete by spending “crores of rupees” by the Ludhiana Improvement Trust. According to some civil engineers, a cement concrete road should last for 15-20 years.

The residents are upset over the poor quality of the road as it had started breaking down within a short period after the construction. A resident of the Tibba Road area, Sunil Nagpal, said: “The road had got damaged at various parts within only two months after its construction. I also remember patches were then laid on two spots but those got damaged too this rainy season. The matter should be taken seriously as to why the road started breaking down within a short time. Public money should not go waste.”

A shopkeeper said: “ Now, the road has started breaking down from various points in the absence of any check. The matter needs to be probed and samples must be collected to check the quality of material.”

Bhola said the road was constructed by the LIT around two months before the Assembly elections. “It has broken at many points now. The contractor has been asked to reconstruct the road, otherwise the matter would be taken up before the Vigilance Department. The road project cost was about Rs 4 crore,” he said.

Kapil Arora, president of the Council of Engineers, an NGO, said: “Cement concrete roads are generally designed for a life span of 20 years. Such roads require only routine maintenance. If Tibba Road started breaking down within months, the authorities concerned should take the matter seriously and take necessary action too.”

Ludhiana Improvement Trust’s Superintending Engineer Rakesh Garg said he would look into the matter and action would be taken.

Tibba Road has broken at many points now. The contractor has been asked to reconstruct it, failing which the matter will be taken up before the Vigilance Department. The project cost was about Rs 4 crore. — Daljit Singh Grewal, Ludhiana East MLA