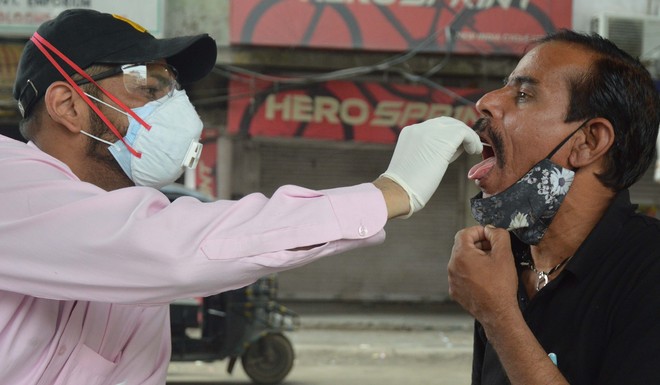 A man gives a sample for Covid test in Ludhiana on Wednesday.

Covid-19 claimed the lives of 19 more persons in the district during the past 24 hours. The Health Department has confirmed 1,186 fresh cases from Ludhiana and 109 from other districts or states today.

Among those who tested positive in Ludhiana, 63 persons came in contact with positive patients, 109 visited OPDs, and 621 with influenza-like illness visited Flu Corner. Besides, 10 persons with a severe acute respiratory infection, two healthcare workers and one undertrial tested positive for the virus. The health department is yet to trace the remaining 290 positive patients. 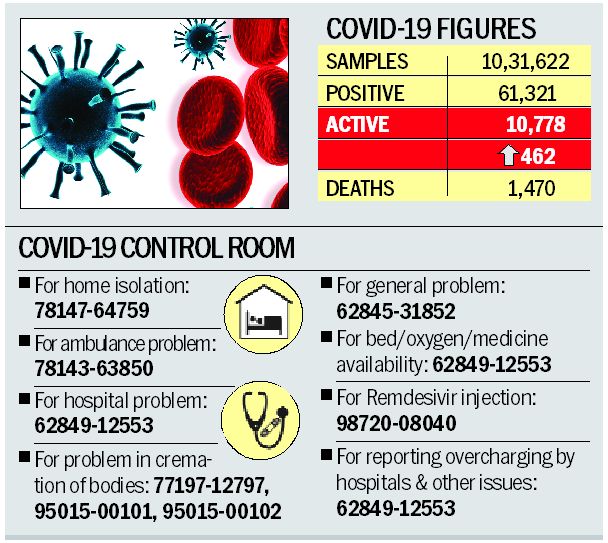 The department confirmed 26 deaths — 19 persons from Ludhiana, two from Barnala and one each from Sangrur, Patiala, Uttar Pradesh, Delhi and Haryana.

At present, there are 10,778 active cases in the district. According to the Health Department, 41 patients — 22 from Ludhiana and 19 from other districts —were on ventilator support.

The Health Department has confirmed 61,321 Covid-19 cases in Ludhiana district and 8,586 cases in other

Terming that the Covid situation has turned grim and health infrastructure is severely strained in Ludhiana, Deputy Commissioner Varinder Kumar Sharma urged people to don’t spoil the hard work of thousands of healthcare/frontline workers, working tirelessly to contain the virus by venturing out unnecessarily.

Interacting with people of Ludhiana on the official Facebook page of the DPRO, Ludhiana Deputy Commissioner Varinder Kumar Sharma said at present, 1,913 beds, including 526 level-III and 1,387 level-II, were filled in hospitals and the administration was going to start 100 beds in the CHC, Jawaddi, and Government Meritorious School soon.

He said the administration was also planning to set up beds in hostels of Punjab Agriculture University if this trend remains the same in coming days.

He said it was really sad that some people were still not following Covid appropriate behaviour properly which was leading to the fast spread of the virus.