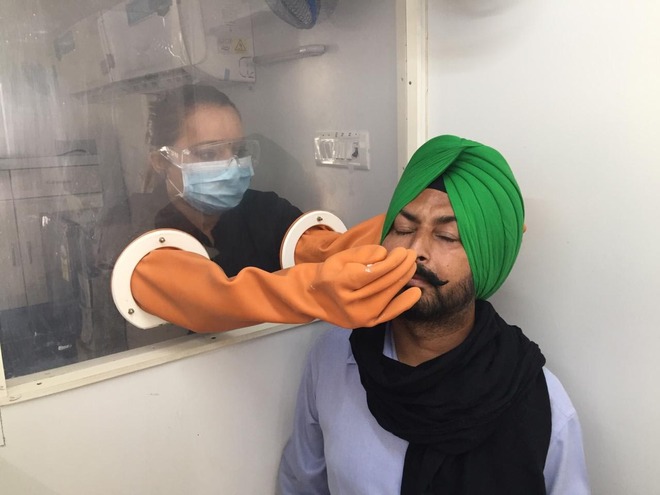 A resident gives a sample for the Covid test in Ludhiana. Tribune photo

As the Covid vaccine was expected to arrive anytime soon, the district administration has set up a vaccine task force to undertake the immunisation drive in Ludhiana.

Having earned the dubious distinction of Covid capital of Punjab, Ludhiana has reported the maximum number of 28,191 positive cases, including 24,558 locals and 3,633 outsiders. The highest count of 1,395 patients, comprising 955 locals and 440 outsiders, had died due to the virus till Friday.

The task force has been established jointly by the civil and police administration under the command of the Deputy Commissioner Varinder Kumar Sharma and the Commissioner of Police Rakesh Agrawal so that no time was lost in preparing for logistics.

The Ludhiana police, which had performed a multifaceted role during the Covid pandemic, had already lost its two personnel, while at least 431 cops, including DCPs and other rank officials, had contracted the virus. While almost all of them had completely recovered, at least eight cops were still “active patients” under treatment.

Stating this here today, the Commissioner of Police (CP) said the police did not restrict itself to the job of “policing” only by way of enforcing the “lockdown” and “guidelines”, but cops proactively involved themselves in Covid management in close coordination with the district administration, Health Department and also private hospitals like Dayanand Medical College and Hospital.

The Ludhiana police had launched a mass awareness campaign for the use of masks. Masks were distributed free of cost among people. Initially, the campaign was motivational, but now, the police were strictly enforcing the use of masks. “The results have been encouraging as despite being such a hugely populated city, with several congested pockets and industrial hubs, the pandemic in Ludhiana has remained quite under control,” he said.

Agrawal said a joint mass awareness campaign and survey was conducted by the Commissionerate of Police and a team of doctors of the DMCH, led by Dr Bishav Mohan, (member of the State Covid Advisory Committee, headed by Dr KK Talwar) on the use of masks.

ADCP (Special Branch) Rupinder Sra, with teams from special branch and traffic police, got 7,500 forms filled from the public as part of the survey.

Later, an awareness drive to check the second wave of Covid was started jointly by the police, DMCH, and the state Health Department, where most congested areas of the city like Kipps Market, Sarabha Nagar and Ghumar Mandi were covered.