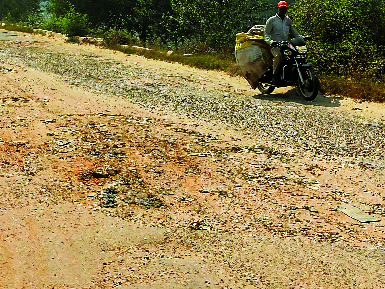 The Neelon-Doraha stretch in a pitiable state. tribune photo

The badly broken Neelon-Doraha road, where the proposed work on a rail overbridge (ROB) is to be initiated, has reduced the lives of the commuters to a virtual hell.

The road has got eroded to the extent that during the rainy season, it could not be demarcated from the adjoining canal. For four-wheelers and other heavy vehicles, it becomes quite tough, but for two-wheelers, it is simply very difficult to use this road.

The road, having umpteen fissures, gaps and potholes, has worsened to the extent that it is no longer visible now. Thousands of vehicles, including heavy commercial ones, pass through the stretch daily.

Due to the absence of any re-carpeting, coupled with poor maintenance, the condition of the road is simply pitiable.

Pal Rani Kaur, a teacher who commutes on the road regularly, said, “It seems we are living in a world of utter apathy where no one is bothered about the problem. The commuters had never demanded four-laning of the stretch. They just require an easy smooth road, which they have been denied. Like many projects of the government, this too seems to have ended up in a fiasco. The road is no longer visible.”

Jandeep Kaushal, a social worker of Doraha, rued, “The stretch is no less than a death trap, as some points are seriously marred by eroded edges and lack of essential supports. The erosion of side supports can result in a major accident any time. The Doraha-Neelon stretch serves as a major bypass and a linker to a number of villages.”

“The situation becomes horrible when it rains heavily. The muddy road results in a large number of vehicles getting stuck with total chaos. Due to the neglect of the authorities, anyone can slip unknowingly towards the canal and invite trouble. Is it not the duty of the department to make alternative arrangements for commuters who are at a grave risk to their life?” questioned Prof Harpreet Singh of Ghulal village.