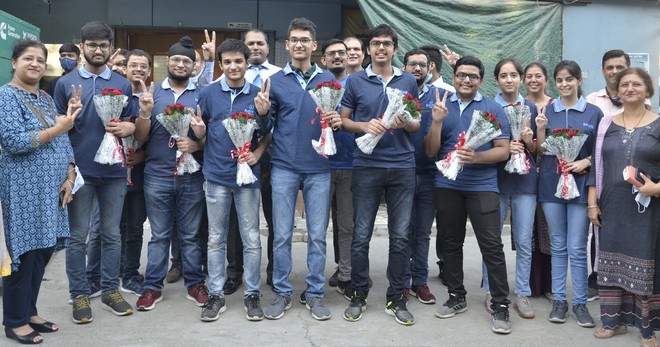 Students in a jubilant mood after the declaration of the JEE Main results. Photo: Ashwani Dhiman

A number of students from Ludhiana performed well in the JEE Main examination results declared by the National Testing Agency (NTA) on Wednesday.

Kanav Singla of Sector 39, Jamalpur, Ludhiana, has achieved all India rank (AIR) 42 in the JEE Mains exam. In his first attempt of the JEE Mains examination, he had obtained 99.998 percentile. He, however, did not appear in the next three attempts and was confident of a good ranking. He has done his Class XII in the non-medical stream with 97 per cent marks from BCM Arya Model School.

Kanav is preparing for the JEE (Advanced) to be held next month as he wants to study computer science engineering at the Indian Institute of Technology, Bombay. He is motivated by his elder brother, Shrey Singla, who is also studying computer science at the IIT Bombay. His father Dr Ravi Kant Singla is a physician and his mother Dr Anju Singla is an anaesthesiologist.

Keshav Gupta of the city has obtained AIR 723 in the JEE Mains. In the last attempt, he gave his best performance and obtained 99.946 percentile. Earlier, he had obtained 99.89 in the first attempt, 99.88 in the second attempt and 99.940 percentile in the third attempt.

Keshav, student of Guru Nanak Public School, Sarabha Nagar, has scored 97.4 per cent marks in Class XII (non-medical). He is preparing for the JEE (Advanced) examination as he wants to study computer science engineering from the IIT, Bombay. His mother Sapna Dev Gupta is a computer engineer and she had resigned from her job to raise her children. His father, Kapil Dev Gupta, is Captain in the Navy.

Aksh Goyal has got AIR 794 in the JEE Mains examination. He obtained 99.94 percentile marks, his best performance, in the last attempt. Earlier, he had got 99.66 percentile in the first attempt, 99.74 in the second and 99.53 in the third attempt. His mother Meena Goyal is a housewife and his father Amandeep Goyal is a businessman.

Motivated by his father, who is a textile engineer, Aksh said he also wants to study textile engineering at the IIT, Delhi. He is currently preparing for the JEE (Advanced) examination to be held on October 3. Student of Ryan International School, Aksh had obtained 96.6 per cent marks in Class XII (non-medical).