Now, Rlys writes to MC to ensure protection of sewer manhole near RUB-2 site, dismantling of structures near ROB/RUB-1 site 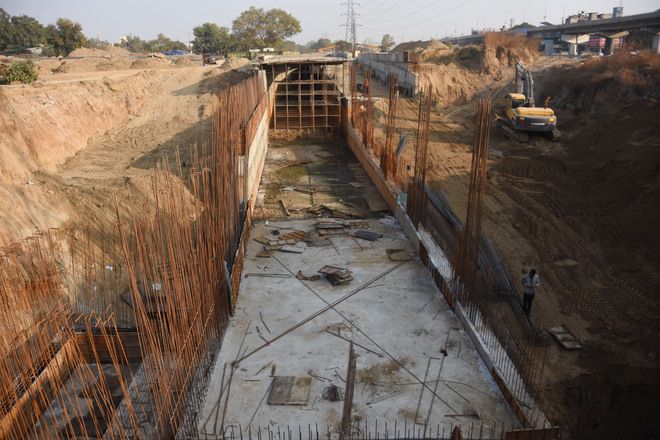 The work on the RUB-2 project in progress at Sarabha Nagar in Ludhiana. Photo: ashwani Dhiman

As the ongoing construction work of a railway overbridge and two railway under bridges (ROB and RUB 1 & RUB 2) project on Pakhowal Road is still incomplete, the public has been left to face inconvenience while the Municipal Corporation (MC) and the railway authorities are blaming each other for the delay in completion of the project.

The project has missed the previous deadline of August 31, 2021, while it was later extended to December 31 by the civic body chief. Currently, the works of both departments — the MC and railways — is pending at the project sites of the RUB-1, RUB-2 and ROB in their respective jurisdictions. It seems both departments would take more months for the completion of their works, leaving residents in the lurch.

A chamber of the main sewerage line had got damaged and sewage had flooded the RUB-2 site around a month ago. Now, the office of the Executive Engineer (Construction) of Northern Railway, Ludhiana, has sent a letter to the Municipal Corporation’s Superintending Engineer concerned to ensure the protection of adjoining manhole of sewer, running only two meters away from the work site at RUB-2 (from Pakhowal Road towards Sarabha Nagar). The railway official concerned claimed in the letter that the protection of the sewer manhole has not been done and there are chances that it might break again.

The railways has also demanded from the civic body to ensure the dismantling of the Improvement Trust boundary wall and two rooms near the ROB/RUB-1 site on Pakhowal Road as they need a working area for the launching of bow string girder of 76 meters span.

The railway official said the MC should take required measures on these matters so that the railways could complete the work. Otherwise, the work would be held up on the MC’s account.

“We had also written a letter regarding the issues to the civic body in the past but to no avail. If our 20 per cent project work is pending, the MC’s about 45 per cent work is also pending. The MC wants to put the entire blame on the Railways,” he claimed.

On the other hand, MC officials claimed that their work was going on in a full swing but the Railway’s work was going on at a slow pace. The MC’s Superintending Engineer concerned said the sewer protection work had already been done.

He said the fact was that the railway authorities were delaying the project and it was supposed to protect every property during the construction work. He claimed that approaches, which were to be constructed by the MC, are almost ready.

Meanwhile, a city resident, Kapil Arora, said: “The public is being forced to suffer due to the delay in the project. Time of people is being wasted. No contractor should be favoured in case of any delay.”

Cabinet Minister Bharat Bhushan Ashu had earlier stated that the railway authorities were carrying out work at a slow pace and he would raise the matter before the Union Minister of Railways.