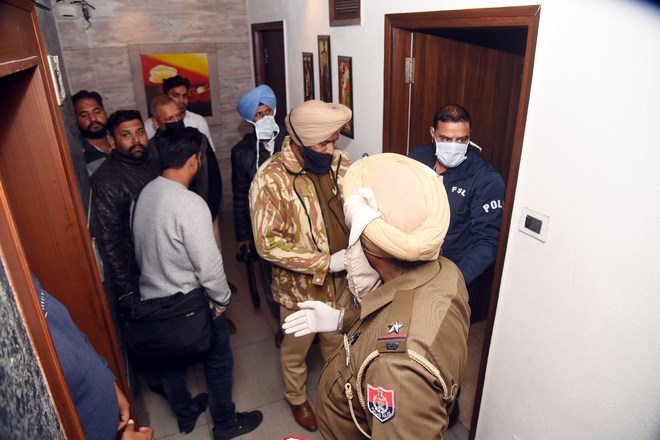 Police conduct probe after the body of a man was found at a hotel near Mata Rani Chowk in Ludhiana on Thursday. Tribune Photo

A man was found dead in a hotel room at Bhadaur House here this afternoon.

The deceased was identified as Rahul Jain, aged 55, of Kitchlu Nagar and was in hosiery goods business.

On Tuesday, some person had booked a room in Nanda hotel. The room number was 504 on the fifth floor of the hotel. The same evening the person left the hotel, telling the hotel staff not to disturb his friend Rahul as he had some health issue. The hotel staff didn’t disturb the person, following the request of the man.

After the matter reached the police today, ADCP Pragya Jain reached the spot, along with a dog squad and forensic experts.

Police sources said on February 16, a man, said to be the friend of the deceased, had booked a hotel room and the next morning, he left the room with clear directions to the hotel staff not to disturb his friend. Today, on suspicion when the hotel staff went to check the room, they found Rahul lying dead.

Sources said Rahul had left his home on February 16 and had told his parents that he was going to Chintpurni shrine in Himachal Pradesh to pay obeisance, but instead of going to the shrine he, along with his friend, booked the hotel room.

Sources said the man seemed to have died due to drug overdose as some injections were also reportedly recovered from the hotel room, but the police denied to confirm any such information, citing the ongoing probe.

The police suspected both had consumed drugs and Rahul could have died due to overdose. Fearing action, his friend left the hotel.

A case under Section 304 (culpable homicide) was being registered by the police against the friend of the deceased who had booked the hotel room.