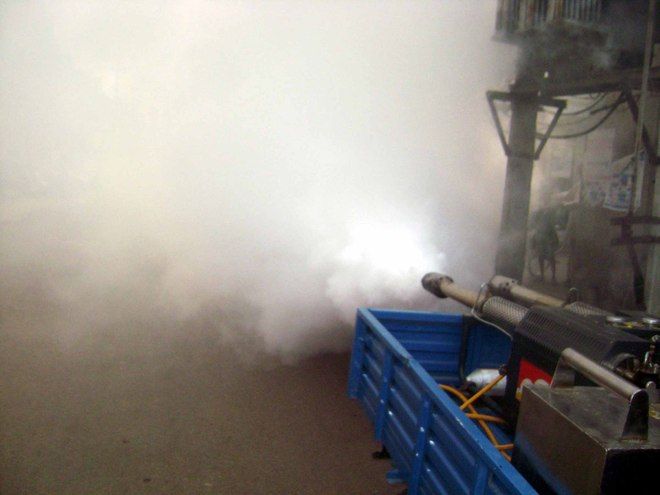 After finding “irregularities” in the fogging service, Mayor Balkar Singh Sandhu today ordered to terminate the service of a fogging machine vehicle driver and recommended to suspend the sanitary officer concerned.

He also ordered to issue a show-cause notice to the MC’s health officer concerned in this regard.

Following information, Mayor Sandhu conducted a surprise raid in an area under the MC’s Zone C at around 5.30 this morning. He caught a fogging machine vehicle driver who had allegedly got refilled less amount of fuel for the fogging machine.

To conduct fogging, 95 litres of diesel and 20 litres of petrol are refilled in a machine. When I questioned the driver, he said he got refilled only 60 litres diesel and 12 litres petrol for fogging from a fuel station. It came to light that 43 litres of fuel was found to be less in the fogging machine. It is a big irregularity. I have also complained against the fuel station owner as to how less fuel was filled in the machine without the involvement of fuel station staff, he said.

“I have ordered to terminate the service of the erring driver who is on a contract basis. I have also given recommendation to write to the government to suspend the sanitary inspector concerned. Besides, a show-cause notice will be served to the MC’s health officer Dr Vipul Malhotra,” he said.

With dengue cases being reported from different parts of the city, many residents have been complaining that fogging is not being conducted properly by the MC. An NGO had also raised questions about alleged irregularities in fuel expenditure on fogging service in the city a few years ago, but no action was taken in this regard at that time. The Mayor appealed to all councillors to keep a check on fogging in their respective wards.