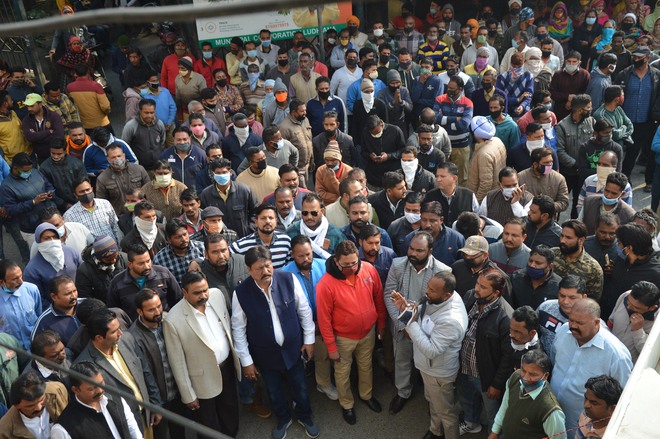 MC employees hold a protest outside the Zone A office in Ludhiana on Friday. Photo: Inderjeet Verma

Members of the Municipal Employees Sangharsh Committee staged a protest outside the MC’s Zone A office over issues related to safai karmcharis, sewer men, sanitary supervisors and sanitary inspectors on Friday.

They said chief sanitary inspectors should be promoted on a seniority basis and designated as corporation sanitation officers and assistant health officers.

They said 30 litres of petrol per month be provided to each sanitary or chief sanitary inspector who visit various areas during their field duties.

During the protest, they demanded that jobs of recently suspended chief sanitary inspector Jagtar Singh and two sanitary inspectors Gurinder Singh and Satinder Bawa must be resumed with immediate effect. The members claimed that action against these employees was wrong.

Besides, they demanded that the pending provident fund should be deposited into the account of the employees.

They demanded from the MC authorities to get the Sixth Pay Commission implemented for better pay scales. They said the civic body should not recruit any retired employee again on the contract or outsourcing basis.

The protesting staff alleged that no action should be taken against any employee on the basis of complaints filed by ‘habitual’ complainants.

Sandhu assured the employees that a meeting would be held regarding the demands that were to be implemented by the MC. Besides, they would meet the Local Bodies Minister regarding other demands of the employees soon, he added.