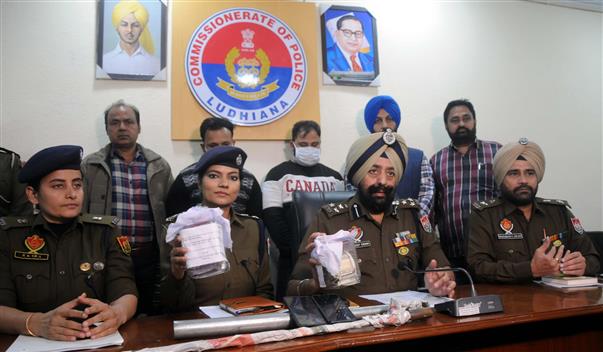 Cops show the cash recovered from the suspects who looted a money changer in Ludhiana on Thursday. Himanshu Mahajan

The Ludhiana police claimed to have solved a major loot incident within 24 hours of the crime in which seven robbers had looted a money changer of Rs 2 lakh.

“After the robbery case reported, my team comprising JCP Saumya, DCP Varinder Brar, ADCP Rupinder Sran and others worked the whole day and night to crack the case,” CP Mandeep Singh Sidhu said. He was also taking every minute update from the team members and he really applauded their efforts.

The police arrested the two suspects, identified as Pritpal Singh Prince (32) of Kailash Nagar and Mukesh Kumar (31) of Farid Nagar. The police recovered Rs 1 lakh in cash, a Honda Activa scooter (PB91M 3256), a Maruti Swift Dzire car (PB91A5656), a bullet motorcycle (without registration number) and a sword used in the crime. Pritpal runs a web channel.

On Wednesday morning, seven robbers had looted a money changer, Dimmy, of Rs 2 lakh and 10 mobile phones. The suspects were captured in CCTV cameras which also helped the police in identifying them. The seven suspects had come on three two-wheelers. They had also attacked the shopkeeper with a sword.

Sidhu said when the police started a probe into the matter, initially the two suspects, Pritpal and Mukesh, were identified. On their arrest, the entire conspiracy of loot was exposed.

“When we questioned the duo, they disclosed the names of their two key aides namely Bobby Singh of Manohar Nagar and Karan Rajput of Kabir Basti. Accordingly, the police also nominated them in the case. Our team is already on the job to trace the whereabouts of all remaining suspects involved in the robbery,” the CP said.

Sidhu revealed that some of the suspects had come in a Swift Dzire car. After parking car near the spot, they joined their other aides on the motorcycles. After committing the loot, some of them fled in the car while others on the two-wheelers.

One of the nabbed suspects, Mukesh, stays near the money changer’s shop due to which he was aware about his daily routine and he had the hunch that Dimmy daily carries around Rs 10 lakh in cash but on the day of the robbery, he was having only Rs 2 lakh in cash and some mobile phones, the CP said.

While addressing mediapersons, Sidhu said it was a clear warning to criminals that if they would not stop committing crimes, the police would show them their real place. The police were also scanning the list of habitual offenders and they would keep a check on their activities. He also urged residents to install maximum CCTV cameras on their premises as these keep a vigil for day and night and also help police in detecting crime.