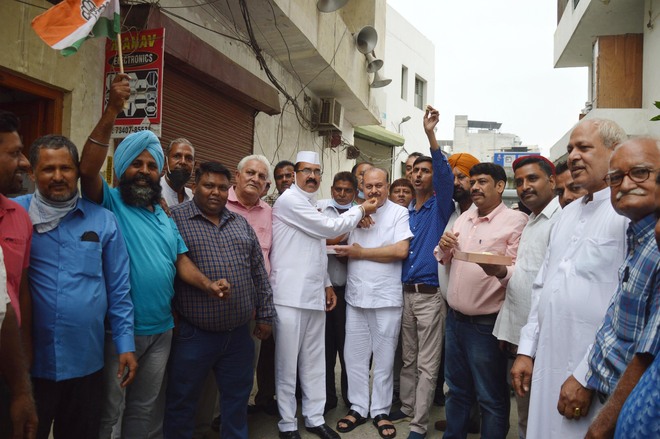 Appointment of Navjot Singh Sidhu as president of Punjab Pradesh Congress Committee (PPCC) has caused a stir in the Ludhiana unit of the party. Local MLAs, who had kept mum on Sidhu earlier, are expected to make a move to get closer to him. Sidhu’s appointment was celebrated at the local Congress Bhawan by distributing ladoos.

Yesterday, Sidhu went to Khanna to meet MLA Gurkirat Singh Kotli and Lakhvir Singh Lakha and then went straight to Jalandhar, without stopping at Ludhiana.

Sanjay Talwar, MLA (East), who is said to be on good terms with Sidhu, said he was expected to visit his house yesterday but the plan could not materialise.

“Every Congress leader should respect the decision taken by the high command. We have to work as a collective strength to win the forthcoming Vidhan Sabha elections. There are differences of opinion but that should not come in between the interests of the party,” Talwar said.

Rakesh Pandey, MLA Ludhiana North, said it was a wise decision. “The decision has been taken by the high command and I support the same,” he said.

Cabinet Minister and MLA (West) Bharat Bhushan Ashu has long-standing differences with Sidhu and nothing has improved over the years. Ashu and Sidhu have been at loggerheads over the delay in development works in Ludhiana, which later escalated over the change of land use (CLU) granted to a housing project in Ludhiana.

Ashu could not be contacted for his comments over Sidhu’s appointment as PPCC chief.

Ashwani Sharma, president of District Congress Committee (Urban), said the decision taken by the high command was acceptable to all. “High command’s decision is final and everybody should abide by it,” he said.