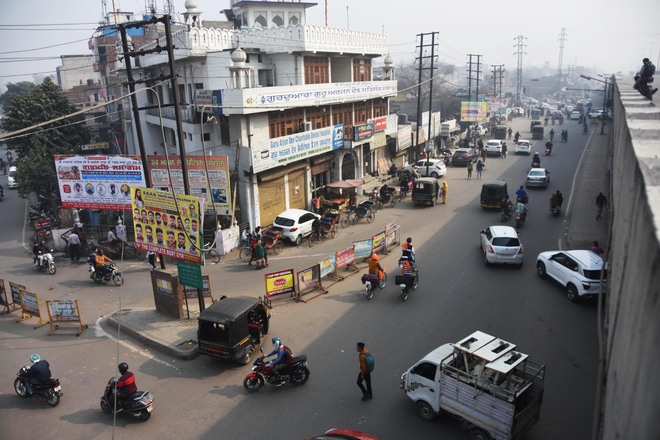 Samrala Chowk, which is declared as a black spot, is one of the main intersections of the industrial hub. It connects the city with the national capital, state capital and inner pockets of the city. But the poor management of traffic, confusion regarding cuts leading to the inner parts of the city and haphazard parking of buses and auto-rickshaws make commuting risky at the intersection.

As per a police survey, as many as 11 persons have lost their lives at the spot in three years (from 2016 to 2018) after they were hit by speeding vehicles. Most of the victims include pedestrians, cyclists and two-wheeler riders.

There are several crossing points at Samrala Chowk due to which the movement of traffic gets affected. At some of the sections alongside the chowk, service lanes are not constructed in a proper manner. During the rainy season, rainwater gets accumulated in the lanes on both sides of the road as well as Chandigarh Road.

“There is no bus lane to accommodate buses at the chowk. Auto-rickshaw in a large number can be seen waiting for passengers in the absence of an auto stand. There are no blinkers and rumble strips on all link roads connecting the chowk,” said local residents.

People alleged that even there were no signboards at the chowk. Many a times, commuters enter the wrong lane which creates a traffic chaos.

Dr Kamal Soi, member, National Road Safety Council, Ministry of Road Transport and Highways, GoI, said: “There is a complete chaos and confusion at Samrala Chowk due to the poor traffic management. Though the design has some flaws, the main issue is the mixing of all kind of heterogeneous vehicular traffic. Auto-rickshaws, buses, trucks, two-wheelers, cars and cycle rickshaws create havoc at the point. There is no pedestrian pathway, risking the lives of pedestrians and cyclists.”

“There is a dire need to segregate the traffic to remove bottlenecks and clear the confusion. Proper signage, rumble strips to control the speed, proper parking and management of buses and auto-rickshaws and enforcement of no entry of commercial/heavy trucks from 8 am to 8 pm,” he said.

11 lost their lives in three years

As per a police survey, as many as 11 persons have lost their lives at the spot in three years (from 2016 to 2018) after they were hit by speeding vehicles. Most of the victims include pedestrians, cyclists and two-wheeler riders.