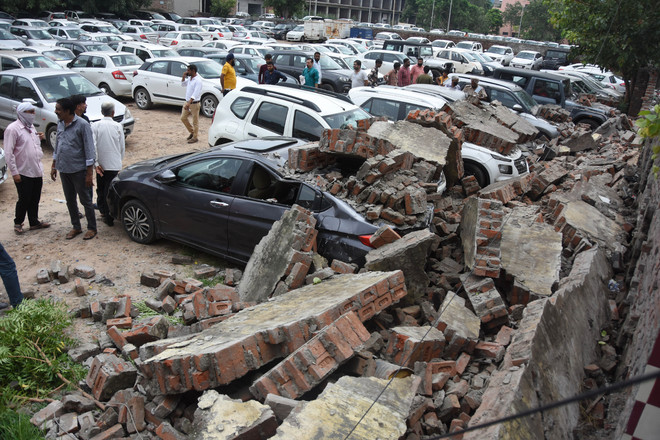 Several vehicles were damaged after a wall at the parking lot of the Books Market collapsed on Sunday. This paid parking lot belongs to the Zila Parishad.

The damaged vehicles belonged to shopkeepers and include two Maruti Brezza cars, two Honda cars, a Duster, a Venue and some others.

After the incident, Kotwali police officials reached the spot to conduct investigation and record the statement of the car owners.

Sahil Rana, who runs a mobile accessories shop, said he had recently bought a new Mahindra Thar and had been parking his vehicle at the Books Market paid parking. This afternoon he got a call from a friend informing him about the wall collapse. “I immediately reached the spot and found big boulders lying on my car. The front part of my vehicle was badly damaged and the loss could run into lakhs,” he rued.

Sahil said he was paying Rs 100 daily for the parking and the Zila Parishad should compensate the loss. In fact, it was the responsibility of the Zila Parishad to keep the surrounding walls of the open parking lot in good state, he added.

Another car owner, Sumit Sharma, said the walls were in bad state and the department was asked to repair the same but no one paid heed.