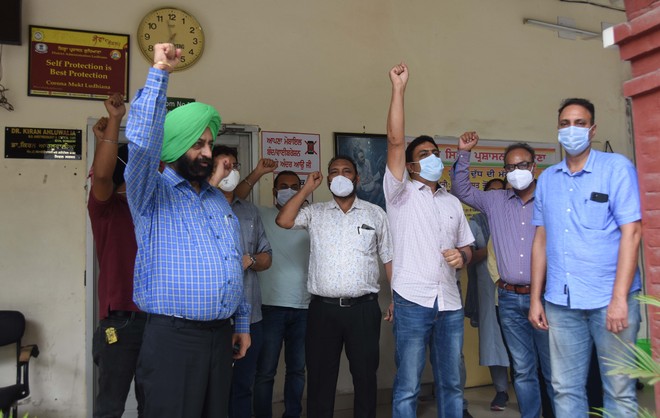 As the government has failed to accept demands of protesting doctors, they today locked the Civil Surgeon’s office for the next three days and sat outside it. Hence, no work was carried out today.

Today, only emergency services, Covid related duties, rape-case examinations and medico-legal cases were attended by doctors at the hospital.

The doctors are protesting against the recommendation of the Sixth Pay Commission to reduce non- practicing allowance (NPA) of veterinarians, medicos and allied professionals from 25 to 20 per cent along with delinking it from the basic pay structure.

“The Civil Surgeon office has been locked round the clock for the next three days and all routine works at the office will remain suspended. OPDs and other services will also remain suspended,” said Dr Rohit Rampal from the Punjab Civil Medical Services Association (PCMSA).

“Despite assurances by the Health Minister, nothing concrete was being done to accept our demands. Despite working 24x7 during the peak of Covid, the government has made reductions in our salaries,” Dr Rampal said.

Meanwhile, people visiting the hospital and the Civil Surgeon’s office had a tough time in the absence of doctors and other employees. In the previous month also, people faced inconvenience as most of the time doctors were on strike.

Manjot Kaur, who had come to collect the death certificate of her father, said upon reaching the Civil Surgeon’s office she saw that the room was locked.

“I enquired from some people standing near it and I was told that works had been suspended there. I came here from Samrala and it is difficult to travel in such hot and humid conditions,” she said.

Another visitor at the CS office who had come to get some documents related to food license said his work would remain stopped till he gets the documents from the department. “It will cause me huge financial loss,” he said.

Meanwhile, a patient from Tajpur Road, who had come to see an orthopaedic surgeon, said he was recommended a surgery but now, there was no doctor to guide him.

“I have been told to come again next week,” he said.

Patients at the Civil Hospital were seen returning without consulting doctors. Some were talking about coming again tomorrow while others decided either to go to private clinics or nearby medical shop to get medicines.