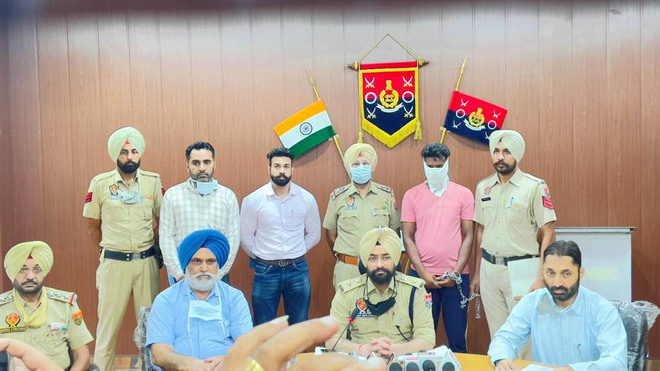 SSP Ludhiana (rural) Charanjit Singh Sohal talks to the media regarding the arrest of a rape accused in Jagraon. Tribune photo

After the visit of Manisha Gulati, chairperson of the Punjab State Women Commission (PSWC), to the house of an eight-year-old rape victim at Roomi village in Jagraon, the Ludhiana (rural) police arrested the accused today.

Gulati met the rape victim on July 18 and had assured her family that the accused would be arrested soon.

Ludhiana (rural) SSP Charanjit Singh Sohal said on July 9, the police had registered a case of rape at Sadar Jagraon police station against accused Karamjit Singh alias Kamma (28), also a resident of Roomi village. Today, on a secret tip-off, Karamjit was arrested from the bus stand of Dholan village.

The SSP said the accused was arrested by a team comprising Sadar Jagraon SHO Inspector Jaspal Singh and Chowkiman police post in charge SI Sharanjit Singh. An application had also been moved to the District Legal Authorities to issue a compensation to the victim, he added.