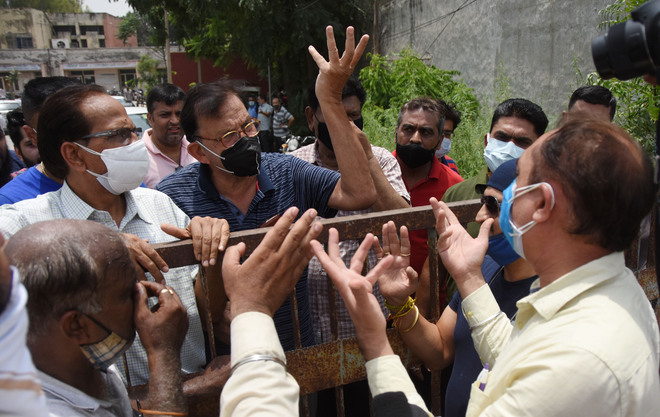 Residents argue with PSPCL officials at the Aggar Nagar division of the PSPCL in Ludhiana. Tribune photo: Himanshu Mahajan

Residents of several colonies in the city have raised their voice against Punjab State Power Corporation Limited (PSPCL) for its failure to provide uninterrupted power supply to consumers during hot weather conditions.

They alleged that even in such a hot weather they are forced to suffer for hours without power supply as complaints were not attended. Many times, we receive SMSes from the customer care that the complaint has been resolved despite the faults were not being rectified.

Pradeep Gupta and Vicky from Dreamland Colony said the transformer in the colony was installed early last year. Now, the number of residents have increased manifold which led to frequent tripping and power failure.

Residents of Civil City Colony in Chander Nagar near Haibowal said the distribution equipment in the area was obsolete and overloaded. People had to go without electricity for days or nights at a stretch.

Fearing attack by an angry mob, the main gate of divisional office of the PSPCL was closed during the protest. However, after some time, the JE, SDO and XEN of the division came out and assured the protesters that snags in power supply in their respective areas would be rectified immediately.

Despite several attempts the Additional Superintending Engineer of Aggar Nagar Division of the PSPCL Parminder Singh could not be contacted for comments. The Chief Engineer, PSPCL/Central Zone, Bhupinder Khosla, said directions were issued to the officials concerned to attend to faults and rectify pending complaints of power failure without any further delay.