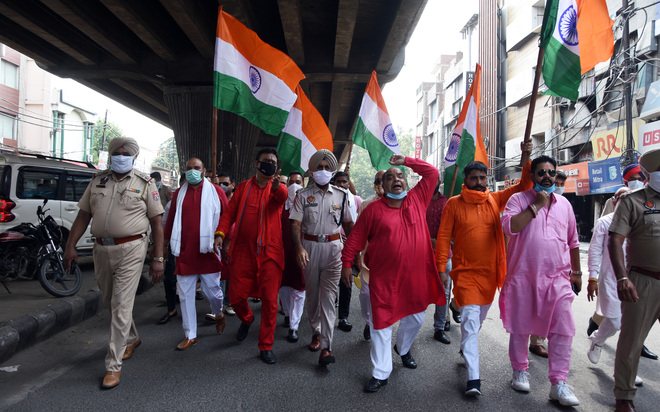 The Shiv Sena Punjab today carried out a protest march against Punjab Rail Roko call given by SFJ head Gurpatwant Singh Pannu and hoisted the national flag at the railway station.

Pannu had earlier given the call to block rail traffic on September 13. Shiv Sena leaders first carried out the march while carrying the national flag and later, they hoisted the flag at the railway station. They raised slogans against Pannu and vowed to wipe out the “Khalistan agenda” from the state.

Chairman, Shiv Sena Punjab, Rajiv Tandon, said the rail roko call turned out to be a flop show as Shiv Sena workers were standing guard to prevent any untoward incident.

Tandon said Pannu was trying to disturb peace in the state by luring youth with cash rewards but residents would not allow anyone to do the same. In future if Pannu repeats any such act, Shiv Sena wouldn’t let him succeed in his motives.

Notably, the SFJ has given a call for ‘rail roko’ on September 13 to highlight the government’s alleged negligence towards the spurt in the farmers’ suicides. — TNS

Mandi Ahmedgarh: Despite a poor response to the Punjab Rail Roko call by the Sikhs For Justice (SFJ) group, the police remained on toes intensifying surveillance at railway stations and railway tracks in the region. However, no incidents of protests or blockades were reported from the region. SHO (City) Amandeep Kaur and SHO (Sadar) Sanjiv Kapoor said a strategy to prevent any such incident had been drafted under the supervision of DSP Rajan Sharma and no untoward incident was reported from the area. — OC