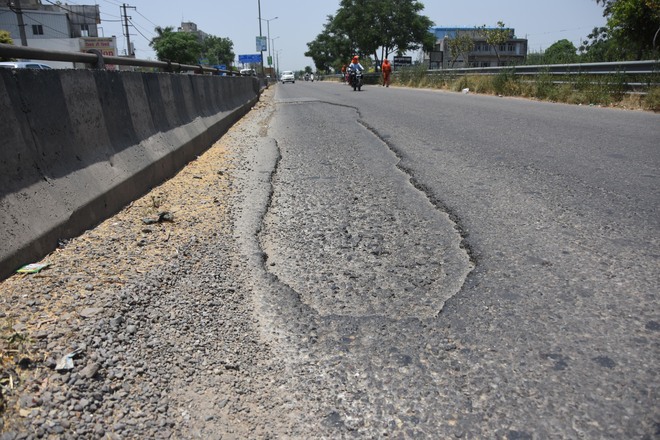 The potholed stretch of Southern Bypass near Jawaddi in Ludhiana. Photo: Ashwani Dhiman

Commuters taking the Southern Bypass stretch along the canal from Jawaddi to Dugri Bridge are a harried lot, thanks to big potholes dotting the road.

Thousands of vehicles pass through the potholed stretch daily. Residents have blamed the authorities for ignoring the potholes for the past several months. They demand the PWD should ensure the immediate repair of the stretch to prevent accidents.

A resident, Damanpreet Kaur, said: “Potholes have appeared on the stretch due to which the chances of mishaps remain high. The authorities concerned must ensure that the road is repaired at the earliest.”

Another resident, Gaganpreet Singh, said: “Commuters are forced to suffer everyday due to big potholes on the road. As the rainy season is just one month away, all broken roads in the city should be repaired as soon as possible. The government should instruct the departments concerned to ensure the repair of roads within their respective jurisdiction before the rainy season.”