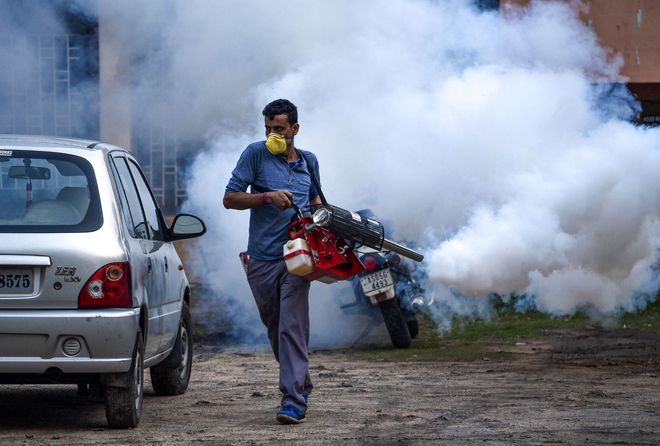 With the rainy season having set in, councillors have asked the Municipal Corporation to start fogging and take other steps to prevent outbreak of vector-borne diseases in the city.

With the rainy season having set in, councillors have asked the Municipal Corporation to start fogging and take other steps to prevent outbreak of vector-borne diseases in the city.

The larvae of Aedes aegypti mosquito, which is responsible for the spread of dengue, were recently found at a few locations.

Councillor from Ward 2 Gurmail Singh Jajji said: “We have not got insecticide and fuel required to run the small fogging machines in wards. However, the residents are already complaining about the presence of mosquitoes in parts of the ward. The civic body should take timely steps and ensure that fogging is conducted in an effective manner to prevent the outbreak of dengue and other vector-borne diseases.”

Leader of the Opposition in MC House Harbhajan Singh Dang said the authorities assured the councillors that fogging would be started within a few days. “All necessary steps should be taken to prevent the outbreak of dengue in the city. Fogging should be conducted in an effective manner in all parts of the city,” he added.

The District Epidemiologist, Dr Ramesh Bhagat, said larvae had been found at a few locations but no adult mosquitoes were found during an inspection. “We have deployed employees to check breeding of mosquitoes,” he said.

The MC Health Officer, Dr Vipul Malhotra, said: “The weather is hot these days. As there is no report of presence of mosquitoes, there is no need to start fogging as of now. It will be started in the coming days as per the guidelines of the government.”