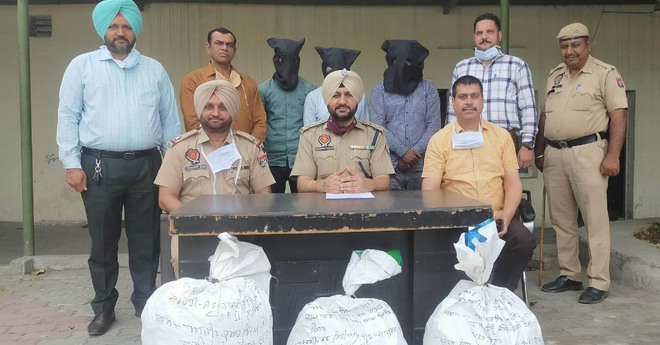 A joint team of the Crime Branch-2 and PCR staff posted at Sherpur Chowk nabbed three persons with 45 kg of cannabis (ganja) when they alighted from a bus coming from the Delhi side.

The police said the trio were booked under Sections 20/61/85 of the NDPS Act.

The police said the accused were identified as Ajit Kumar (32), resident of Boksa in Buxar (Bihar), Dev Narain (35), resident of Chaudhry Tola Mahindroo in Patna (Bihar), and Aman Kumar (27), resident of Masaar, under Udwant Nagar police station in Bhojpur (Bihar).

During preliminary interrogation the accused revealed that they had purchased the contraband from Varanasi in Uttar Pradesh for selling the same in the city.

The police have arrested two persons, identified as Badal and Sunny, both residents of Guru Nanak Nagar, 33-Feet Road in Mundian Kalan, and recovered 100 gm of heroin from them.

The police said the duo were coming on a TVS Jupiter scooter (PB-10FQ-8939) and made an attempt to take a U-turn on seeing the police party posted near Ashiana Park, near Mundian Kalan. The duo were intercepted and booked under Sections 21-B/61/85 of the NDPS Act and the scooter was impounded.