No mechanism to ease traffic congestion during opening, closing hours 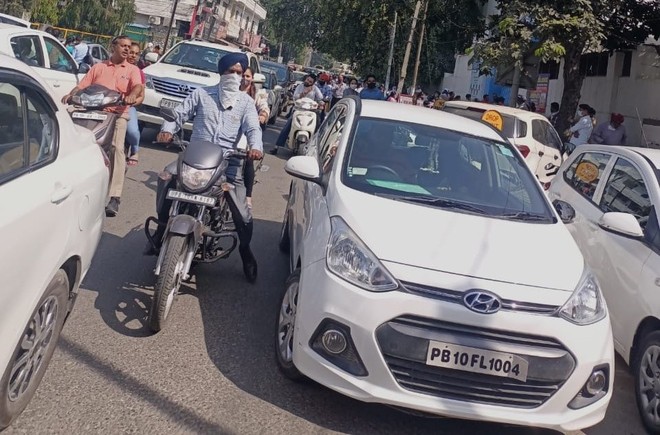 Commuters stuck in a traffic jam outside BCM School in Shastri Nagar in Ludhiana. Ashwani Dhiman

Most of the schools have been reopened in the industrial hub due to which long traffic jams are witnessed outside schools during their opening and closing hours.

Most parents arrive in private vehicles

Shopkeepers and residents near the school said most of the parents, even if they have one children or two, come in four-wheelers to drop and pick-up their wards. Parents should use two-wheelers to avoid traffic congestion. “Everyday parents park their vehicles outside our shops and houses and when we stop them, they indulge in arguments with us. We are paying the price of having our shop and house near schools,” says a shopkeeper and a house owner.

Serpentine queues of vehicles were seen during a visit to some schools in the opening and closing hours.

At most of the schools, no major presence of traffic police personnel was seen, parents were seen crawling through the jam-packed roads. Some schools deployed their employees to manage the traffic mess but their minimal number is not able to ease out the traffic.

“This afternoon when I came to pick my child from BCM School in my car, I got stuck in a long traffic jam. I started from the school at 1 pm and reached my house near the Sangam Palace chowk in Haibowal at around 2 pm. Firstly, I got stuck outside the school, then I faced another traffic jam on the Malhar road. I took an hour to cover the 7-kilometre distance due to the traffic jams,” says Monu Kapoor, a parent.

Another parent Raman Chawla said schools should have necessary parking arrangements to cope with the rush of parents. Parents park their vehicles in an haphazard manner which causes traffic congestion due to lack of parking space.

Traffic police are also not deploying police personnel to manage the traffic rush.

When a traffic policeman rudely asked a man to pay heed to the traffic rules during a traffic jam outside BCM School on Tuesday afternoon, the parent felt humiliated and started exchanging arguments.

Rahul Verma, a member of the Punjab Road Safety Council, told The Tribune that schools should deploy marshals to man traffic during opening and closing hours. Schools are also not allowing parents to bring their vehicles inside the institutions due to which parents park vehicles haphazardly on roads which leads to traffic jam.

“If we will resort to wrong parking outside schools, what lessons we are teaching to our children as they will also follow us. I believe if parents will stop bringing their wards in their private vehicles and make use of school buses, traffic congestion can be checked outside schools,” Verma said.

Police Commissioner Gurpreet Singh Bhullar after joining the Ludhiana police had also stated that checking traffic congestion was one of his priorities in Ludhiana.

“We will definitely develop some mechanism to sort out the traffic issue outside schools,” Bhullar said.