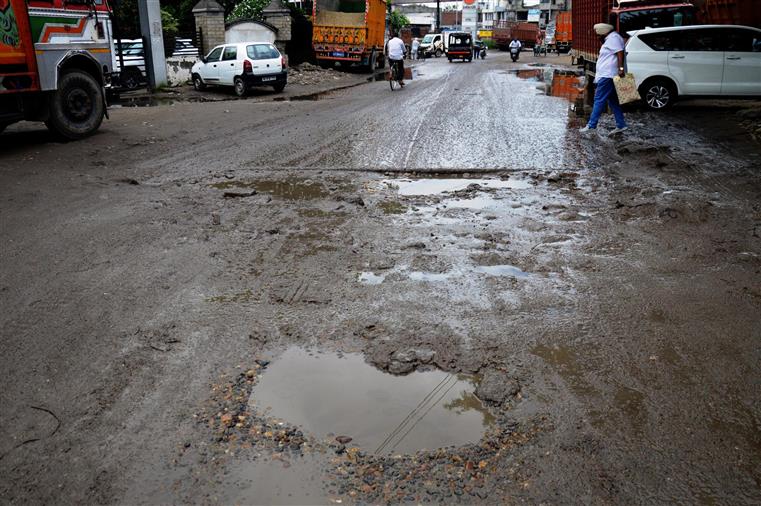 The dilapidated condition of roads in Transport Nagar has become a headache for commuters.

The main entrances to Transport Nagar from National Highway (Ludhiana-Delhi road) near Samrala Chowk and Link Road are in a bad shape. The chances of mishaps remain high due to potholed roads. The transporters have been demanding good road infrastructure and development of the area for a long time.

“I have been visiting here for the past several years but still many roads are in a state of complete neglect. Nothing has been done to repair the deep potholes that can damage parts of the trucks and other vehicles too. The roads should be reconstructed in a proper manner. There is also need to develop the parking areas for trucks”, said, Shamsher Singh, a truck driver from Haryana.

Transporter, Vikramjit Singh said that the condition of the potholed roads became worst this rainy season. “It is difficult to commute on badly damaged roads. Whenever it rains even for a short time, the entire Transport Nagar gets flooded. We demand early reconstruction of damaged roads and permanent solution of rain water-logging and overflowing sewage problems”, he said.

JP Aggarwal, president, Ludhiana Goods Transport Association, said there are about 15 roads in Transport Nagar. A project to reconstruct seven roads was earlier launched but only five roads were constructed while the work on two roads was left midway. There are around eight more roads which are yet to be reconstructed.

Former president of the association, Didar Singh, said some roads which were recently constructed of concrete are above the level of road berms. He said that the civic body should also correct the berm levels at the earliest. He further said that the floor of parking areas where trucks are stationed needs to be constructed too.

Meanwhile, the transporters also demand the installation of a stormwater drainage system to avoid water logging on the roads in the area during rains.

MC’s Superintending Engineer, Ranjit Singh said that the construction work on two roads was stalled by the contractor due to a shortage of required material and it is expected to be resumed soon. He further said the MC has also approved another resolution for making the remaining roads at Transport Nagar.

MLA from Ludhiana Central, Ashok Parashar Pappi said that the remaining roads at Transport Nagar would be constructed at an estimated cost of Rs 1.55 crore and this project has been approved by the civic body. Regarding the problem of rain water-logging and an uncovered nullah, MLA said that required measures would be taken in this regard.