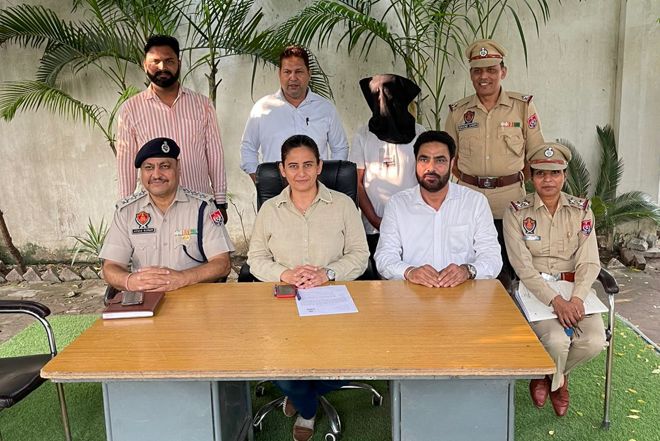 The suspect in police custody in Ludhiana. Tribune photo

The city police yesterday arrested a smuggler and recovered 120 gm of heroin, the market value of which is in lakhs in the international market. The suspect, who had a notorious past, had allegedly developed links with big smugglers of Jammu and Kashmir (J&K).

Talking to mediapersons, the ADCP said acting on a tip-off, a team of the anti-narcotics cell laid a naka near the Jalandhar bypass where the motorcycle-borne suspect was signalled to stop for checking. During his frisking, heroin was recovered.

Later during the questioning, the suspect made startling revelations about the drug chain. He confessed that he was in touch with big smugglers of Jammu and Kashmir and he had brought consignments of heroin from them several times in the past, Sran said, adding that now, the police would bust the entire supply chain and after zeroing in on the J&K smugglers, the team would be sent there to catch them.

Meanwhile, the DCP said now, police were already keeping a tab over bailed out smugglers who after coming out on bail continue the illegal trade. Even this smuggler, who was already facing three smuggling cases, continued the drug trade.