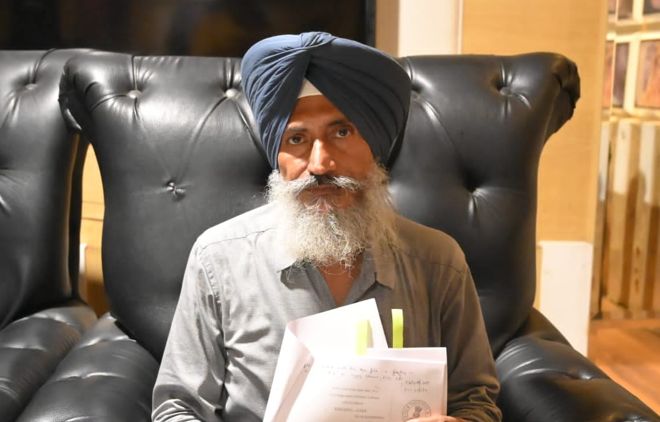 Jatinder Singh, a resident of Jhande village, alleged that some officials of the Ludhiana police have been harassing him by conniving with some land grabbers. He sent a complaint to the Chief Minister to seek action against the officials.

On the basis of another complaint to the Principal Secretary, Home Affairs and Justice, a probe has also been marked to the DGP against Ludhiana Commissioner of Police (CP) Dr Kaustubh Sharma on June 30.

Jatinder Singh today addressed a press conference in this regard.

He alleged that some people wanted to grab his land and property, which were already registered in his name on the basis of the will of his father Amrik Singh, by filing fake complaints to the police. He also submitted the entire property record, along with the civil court order, regarding the property to the Ludhiana police but some officials continued to harass him.

The complainant alleged that the civil court order clearly mentioned that the will was validly executed by Amrik Singh, father of Jatinder (complainant). Hence, the latter was the real owner of the property, still the police officials continued to harass him.

The complainant said the police officials were also not allowing him to sow paddy in his field at Jhande village.

However, Commissioner of Police Kaustubh Sharma told The Tribune that Jatinder had a land dispute with his brother and whenever he was called to the police station to hear his complaint, he hardly visited the place.

“I have been updated that a decision by a lower court has gone in his favour and the JCP (rural) will examine and give necessary protection,” Sharma said.

SHO, Sadar, inspector Gurpreet Singh, said the complainant was never stopped by the police from sowing paddy on his land and whenever he called the police, the latter used to visit the place.